No More Teachers, No More Books... 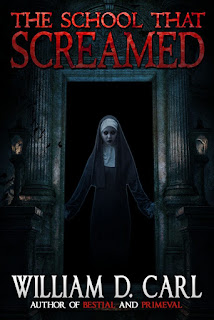 William Carl's The School That Screamed has been sitting on my TBR mountain for quite some time, and I just now got around to reading it. Part of my hesitation on actually starting it comes from the fact that I've recently been inundated with haunted school stories, be it on TV, short stories, or novels, and none of them offered up anything new to this particular sub-genre of horror. The School That Screamed is no different in that respect, but that doesn't mean I didn't enjoy it -- because I did.

The novel takes place at the Dolly (or is it Dollie? My one BIG gripe with the novel) Elliott School for Girls, a last-resort boarding school for "bad" girls, or girls that parents just don't want to be bothered with anymore. Laura Pennington is one of these girls. She's the "new girl" and arrives at the school carrying a secret she doesn't want to share with anyone, not realizing the school also possesses a secret. The new teacher, Sarah Stallworth, also has a secret, one that could get her relieved of her position if anybody were to find out about it. Rounding out the cast of characters is Yvonne Blaylock, the tough-as-nails head mistress, Jon O'Hara, the token male character (who's really one of the girls), and the rest of the "Scooby Gang" -- Allie Sayers, the self-proclaimed Queen Bitch Brandy Huber, and Goth girl Jane Melville, who also happens to be a practicing witch.

Carl doesn't waste time getting into the story, as we soon learn that Allie is having visions. She keeps seeing an eyeless nun (are spooky nuns the genre's new clowns?) staring at her from the mirror, but when she turns around, there's no one there. She eventually confides in the new girl, and we quickly find out that the school has a past. It was known at one time as the Mary Magdalene Home for Wayward Girls, a half-way house run by nuns and populated by unwed mothers. And as all nuns are evil bitches, we soon learn that these Godly women were far from Christian-like with their charges, which resulted in many of their deaths. It is these girls and the nuns who haunt the school.

As the story progresses, the supernatural events and the body count escalate quickly, and we can tell by the chain of events that Carl is building up to something. Just what that something is, we don't know, but we can suspect. Chances are, if your familiar with this type of story, you know what the climax is going to be. I'll leave that to you to find out.

Carl has a way of moving us quickly through the story so there's no lag in the narrative, and combine this with the author's style of writing, you can find yourself caught up in the events and reading right through to the end in one sitting (if time allows).

However, as much as I enjoyed the book, it isn't without its faults, the most obvious being names. As mentioned earlier, the school is referred to at times as the Dolly Elliott School, and at other times it is the Dollie Elliott School, a teacher's name switches between LeBoum and LeBouf. For me, the relationship between the girls develops too quickly. The book reads like it takes place over the period of a few days to a week or so, so for Laura to be calling the other girls friends doesn't seem right or natural. Roommates, acquaintances, classmates, but not friends, which leads me to the way the characters react and respond to certain situations.  Reactions don't ring true, which for me is a definite minus. I want characters to respond realistically within the world the author has created, so when one of the girls makes a play for one of the other girls, it's brushed off as if nothing happened. Within a serious horror novel, which is what Carl is trying to paint here, there should be an awkwardness between the girls that lasts awhile, but for the sake of moving the novel forward, they treat it as if it's no big deal. That kind of revelation could put a strain on even the best of friends, and for two strangers? Awkwardness, silence, avoidance, until the one has had a chance to take it all in and decide how she wants to handle the situation.

Later on in the novel, Carl attempts to throw some humor into the mix (I guess, to alleviate tension), but it falls flat because it comes out of nowhere. Were we in a Buffy-type situation, where these types of quips and banter are a staple of the show, it seems out of place in Carl's work. One can very easily imagine Cordelia hesitating as the action plays out to consider her dress or her shows and how she really doesn't want to damage them or get them all bloody, but for these characters, when they are stressing how important it is that they move quickly in order to save the day, to stop and worry about their designer shoes and to actually remove them so they won't get ruined, opting to walk across a blood-soaked floor, has the reader rolling their eyes instead of laughing. While this might not bother some readers, it was enough to pull me out of the story.

Issues aside (as I said, they might not bother some readers), I would still recommend The School That Screamed, especially on a day when you find yourself locked inside with nothing to do. With the Northeaster heading our way, I can't imagine a better way to spend the time.
Posted by Woofer at 10:12 AM