Don't Mess with the Ness 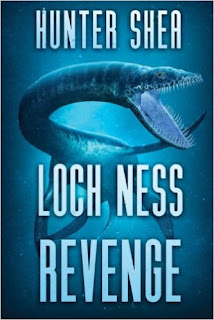 After have read Hunter Shea's The Jersey Devil, I was eager to jump into another one of his novels to see if he could deliver the same thrills twice in a row. It was a no brainer as to what book of his I would read next, as I have loved The Loch Ness Monster ever since I was a kid, and often fantasized about camping out on the shores of Loch Ness with the hopes of catching site of the elusive Nessie.

As the title boldly claims, Loch Ness Revenge is a tale of vengeance. It tells the story of Natalie and Austin McQueen, a brother and sister pairing who are seeking revenge on the creature that killed their parents. Kids at the time, they witnessed the serpentine creature constrict, then drag under the two people they loved most in the world. Left in the care of an aunt, they came into their inheritance when they turned eighteen. Austin did his best to move on with his life, but Nat, consumed by rage, grief, and a thirst for vengeance, sacrifices everything to get back at the creature that robbed her of her parents. Camped out on the shore of Loch Ness, she begins the long wait for Nessie to make an appearance.

It's Nat's belief that Nessie sightings come in waves, and when her suspicions are confirmed, she reaches out to her brother to come share in their moment of victory. Joining them is Henrik Kooper, a man haunted by his own monsters, and together they set out to destroy Scotland's prehistoric mascot. As the battle rages, their survival becomes questionable, as they make a discovery none of them could ever have expected.

Once again Shea delivers a fast-paced thrilled ride of epic proportions. Style-wise, it reminded of old Koontz books in that it catches you up in a wave in the first chapter and carries you through to the very last page, but unlike Koontz, whose endings, in my opinion, tend to fall flat, Shea's ending is satisfactory and doesn't leave the reader feeling disappointed. He does, however, leave you chomping at the bit for more as he sets up what we hope will be his next novel.

My only disappointment with this novel is that the cryptozoologist introduced in The Jersey Devil doesn't make a reappearance in this one, which had the perfect setup for him to appear. If you're a fan of creature feature fiction, this one is definitely one to pick up.