A Devil of a Good Time 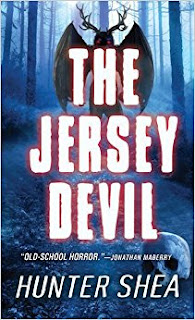 In addition to being a fan of giant creatures, I also happen to be a fan of cryptids. Bigfoot, chupacabra, the Mothman, I love them all. So when I saw Hunter Shea's The Jersey Devil, I knew it immediately it would find its way into my TBR pile. As to when I would get to it, that's another story. And that's only because I'd never read anything by Hunter Shea, so I wasn't making it a priority like I do with something authors. Turns out, it only took me about eight months to get to it — and I'm kicking myself for having waited so long.

The Pine Barrens of New Jersey is home to the Jersey Devil, a winged, cloven hoofed creature described as being a cross between a horse, goat, bat, and man. Like its fellow cryptids, the Devil is elusive, preferring to keep itself hidden within the wilds of the Pine Barrens, but something has happened, something that has forced the Jersey Devil out of hiding and sightings are on the rise. However, unlike sightings in the past, the Jersey Devil has become aggressive and is actively hunting those who venture into the Barrens.

To the Willet clan, the Jersey Devil is no legendary creature. Sam Willet has had an up close and personal encounter with the creature, and years back, it abducted his fiance. While she eventually escaped, she was never quite right afterward, and the encounter left her marked with a birth mark in the shape of a cloven hoof. What the mark means, neither she nor her husband know. What they do know is the mark has been passed on to their only child, who, in turn, has passed it along to his children. For years now, they've tracked the sightings of the Jersey Devil, which, for the most part, have been rare to non-existent. But now that they sightings have increased in frequency, Sam Willet has decided now is the time to get to the bottom of things and find out what the mark means. He and his family head into the Pine Barrens to confront the Devil, but they encounter more than they bargained for, and finding out what the mark means has been all but forgotten as they fight for their very lives.

There's a certain predictability to Shea's novel and there are few surprises, as early on it is revealed what causes the Devil to go from relatively docile to practically rabid — if you can't figure it out, you haven't watched enough environmental horror films — and I called the birth marks early on, but that doesn't take away the fun of the book. What Shea does deliver, though, is a thrill ride worthy of the best slasher films. He launches you into the action on the first page, and doesn't let you rest until the very last page. There is, however, one twist that took me by surprise, which I will keep mum on. If you want to know, you'll just have to read it for yourself.

The other thing Shea delivers is a set of fully realized characters, ones you get to know and care about, which is rare in today's horror fiction, and find yourself rooting for as they go up against insurmountable odds. There's one character in particular, Norm Cranston, a cryptozoologist, that I became particularly fond of, and I hope he makes appearances in Shea's other novels.

This is my first foray into the worlds of Hunter Shea, but it definitely won't be my last. Already a quarter of the way into Loch Ness Revenge.