Rock and Roll Will Never Die... 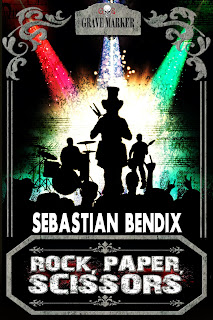 ... the artists, on the other hand... Well, that's a different story altogether.

I continue my review of Grinning Skull Press's Grave Marker line with "Rock, Paper, Scissors" by Sebastian Bendix, which deals with The Tailor, a nightmarish figure of legend that parents called upon to handle unruly and unkempt children. When he is accidentally summoned by a grunge rock band during a late-night jam session, all hell breaks loose. You see, The Tailor wants to help The Filthy Habits clean up their act -- whether they want his help or not.

"Rock, Paper, Scissors" is a typical slasher story, so you've probably seen the scenario in countless other stories or movies, but the villain in this one is unique, as I've never come across a story that deals with The Scissor Man. The other thing that differs with this one is the characters, especially Dreads. In these types of tales, you usually find yourself rooting for the monster, but in this one, she's the one you find yourself rooting for, as she finds herself in the wrong place at the wrong time. From the beginning, she questions why she's with the band when she deserves so much more, and she's considering breaking out on her own because she realizes that she's going nowhere as long as she stays with these losers. But it seems she's made her decision to leave one day too late, and she's racing through the run-down textile mill that houses their studio desperately looking for a way out. The Tailor, however, has been quite thorough in blocking all the exits. Will The Filthy Habits live long enough to play their next gig, or will their music live on without them? This one is highly recommended.

GSP's Grave Markers are short, satisfying reads they don't leave you hanging. They're complete tales that are perfect for that long wait in the doctor's office, that long morning commute, or that afternoon where you don't want to get bogged down in a novel and find short stories too short to be satisfying.
Posted by Woofer at 9:54 AM