Ghost Girl on the Train 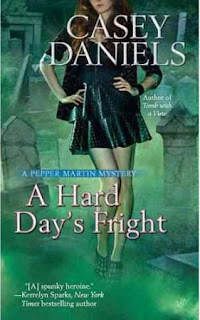 I have to admit, as much as I love the Pepper Martin Mysteries, I went into this one with some reservations. After a solid start to the series, Daniels stumbled with Dead Man Talking, Book 5 in the series. She regained her momentum with Tomb With a View, so I wasn't sure what to expect with A Hard Day's Fright. Needless to say, I couldn't put this one down.

For those who aren't familiar with Pepper, she has a rare gift, thanks to an unfortunate accident where she was knocked unconscious after tripping and hitting her head on the corner of a mausoleum while giving a tour of Cleveland's Garden View Cemetery, home to many deceased celebrities. When she comes to, she has the unfortunate ability to see dead people. And not only can she see them, she can hear them -- and the one thing's she's discovered is that the dead do not shut up until they get what they want. And since Pepper is the only one who can communicate with them, it's up to her to complete whatever mission they have in store for her so both she and the spirit can finally have some peace and quiet. Unfortunately for Pepper, there never seems to be a break in the action because there's always some departed soul who needs her help. A Hard Day's Fright is no exception.

Thanks to mechanical issues with her car, Pepper is forced to rely on public transportation to get herself to and from work. During a ride on the train, she is confronted by the ghost of a teenager who can't move on until her remains are found and she has no clue as to where they can be. Faced with a nigh-on-impossible task, Pepper is tempted to walk away once she realizes the girl's spirit cannot leave the train, but she quickly has a change of heart once she hears Ella, her boss at Garden View, mentions the girl's name in relation to her youngest daughter's irresponsible behavior. Pepper soon learns that Lucy Pasternak had been Ella's best friend when they were in school, and Ella was the last person to ever see Lucy. Ella refuses to believe Lucy is dead; her belief is that she disappeared and is alive and well somewhere, maybe being held hostage (for forty-five years!).

Little by little, one false lead after another, Pepper, aided by Ella and Ariel, Ella's youngest daughter, slowly pieces together the puzzle she thought she never stood a chance of solving.

What was so refreshing about this particular outing is that never during the investigation did Pepper find her life at risk. There are a few surprising twists, some laughs, and an ending I didn't see coming, which has me hungry for the next installment to find out what Pepper is going to do. These books are light, fun reads that you can polish off in a day or two, and despite the nature of the investigation, you always come away from the books feeling good. If you haven't had the good fortune to make Pepper's acquaintance, I strongly urge you to do so. And while each book does stand on its own, they usually pick up right where the last one left off or within a short period of time afterward, so I would suggest starting at the very beginning with Don of the Dead.
Posted by Woofer at 1:21 PM