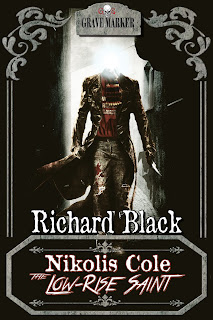 Last year, Grinning Skull Press launched a new line of short fiction called Grave Markers. What are they? Stories ranging between 10,000 and 20,000 words, too long for anthologies, but not long enough to be published as stand-alone novellas. They're published individually in digital format, and then later on in print as 3-in-1 compilations. Richard Black's Nikolis Cole: The Low-Rise Saint was the premier release in this new line. What's it about? Well, read on.

War has broken out on the streets of Southeil between two rival gangs over the death of one gang leader's first lieutenant. The war has raged on for nearly a year, with no end in sight. The only chance Detective Karen Oswalt and her partner have of ending the war is by bringing the killer to justice. Unfortunately, they haven't a clue. When they receive a phone call from a long-thought-dead informant claiming to know who the killer is, they jump at the chance and arrange a meeting, never thinking for one moment that they might be walking into a trap. What they do walk into defies explanation, something their cop instincts (and common sense) say can't possibly exist, but there it is. They need to come to terms quickly with what they are witnessing, otherwise their very lives might be forfeit.

Even though the piece is short, Black showcases his talents as a writer by creating a believable world populated with realistic characters you quickly get to know and and like (well, some of them, at least). His vivid descriptions of the gritty landscape places the reader on the streets of Southeil, and you come away from the story feeling just a little grungy, but wanting more. The story begs for expansion, and if not an expansion, at least another installment, and I could definitely see a movie being made of this.

Those who follow my reviews know there's usually a but coming, but in this instance, there is no but. If you're looking for something to read, but don't have the time to invest in a full-length novel, I would definitely recommend this tale, as it could very easily be finished within half an hour.