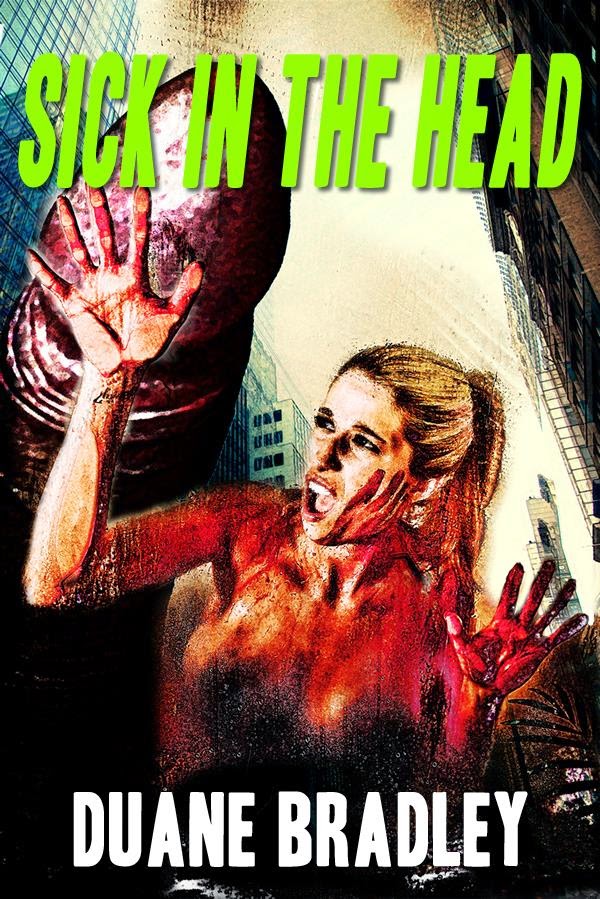 Don't ask what possessed me to buy Duane Bradley's Sick in the Head, because I have no idea. Maybe it was a freebie, maybe it was only 99 cents, but whatever the reason, I'm glad I did.

Detective Greg Parker, like most men, isn't exactly happy with the size of his pecker, so when he stumbles across the means of making it larger, he... well, he doesn't exactly jump at the chance because it involves eating another man's penis (we're not talking blowjob here), but when the opportunity presents itself in the former of a Lorena Bobbitt-type cast off, he takes advantage of the situation (tastes like chicken). While this "ancient Chinese secret" has the desired effect, it isn't without side effects: Parker's pecker literally takes on a life of its own. It can talk, and it doesn't always need to be attached to Parker to seek out what it wants. And since Parker, like most men, tends to think with his crotch, we all know what Seymour (yeah, that's its name) wants. The only problem is that with each sexual conquest, Seymour grows. There's no stopping it (you know where this is going, don't you?). Eventually what we're faced with is The Attack of the 50 Foot Penis. How will New York City survive? Well, I won't spoil the fun, but there is a secret weapon that is rolled out that had me literally laughing out loud.

Given the nature of the book, it's obviously not for everyone, but if you if you have a slightly warped sense of humor like I do, then you will enjoy Sick in the Head. The story is short and moves at a fast pace, and Bradley's sense of twisted humor, while sophmoric (what else can you expect when telling the story about a mobile talking penis?), is spot on. I wasn't expecting much when I started reading, but quickly found I did not want to put it down until I reached the end. If you can put your delicate sensibilities aside and suspend your disbelief (crumple it up and throw it out the window), then I would highly recommend this one.