A Love That Dare Not Speak Its Name 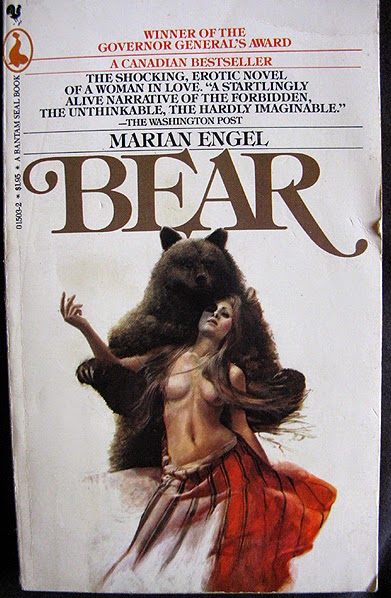 Back in July I made my annual trek to Rhode Island for NECON, a small gathering of horror writers and artists. One of the discussions I got involved in was the trend toward Monster Porn that seems to be so popular on Amazon these days. Tawdry covers and titles like Taken by a T-Rex, Raped by a Raptor, and Moan for Bigfoot. No, I haven't read them, but someone asked me if I had ever read Bear by Marian Engel, and silly me had never even heard of it. I asked what it was about and was told it was about a woman who has sex with a bear. "A werebear," says I, thinking along the lines of paranormal romance, and he said, "No, a real bear." He went on to say that it had been a bestseller in Canada and even won some sort of award. Turns out the the award it won was the Governor General's Award, the highest honor a book can receive in Canada. Curiosity got the better of me; I had to check it out. I mean, how bad can it be, right? Bestiality? I've read worse.

The novel starts off innocently enough with the Institute Lou, our central character, is employed by inherits the Cary estate, which is situated on a remote Canadian island. Lou is sent to settle the estate and catalog the massive library contained within the house, as it was requested that the library not be separated from the property. Lou doesn't quite know what to expect upon her arrival at the house; the one thing she is not expecting, however, is a bear. A tame bear. It seems the previous own kept a bear on the property, penned up and chained the way you would a dog in an outdoor kennel.

At first she wants little to do with the animal, and the bear expects nothing from her except its food, but it seems the prior owner was fascinated by the species, as were her ancestors, as there are notes written on slips of paper in just about every book Lou picks up, all revealing some cultural or historical fact about bears. It might be subliminal, but before too long she takes an active interest in the bear, taking it for walks, swimming with it, and even allowing it into the house to curl up by the fireplace while she works. With no one else on the island save for an old Indian woman, who Lou has only encountered once or twice, Lou has no social outlet unless she wants to take a trip to the mainland, so she turns to the bear as a companion. The relationship between the two progresses quite rapidly, and eventually becomes intimate, and that's when Lou begins to lose herself. She becomes more of a wild woman, living only for the bear, and it seems like she is willing to give up her previous life to stay on the island and care for the bear. The inability to consummate their relationship by committing that final act  frustrates Lou, and at first she blames the bear, but then she realizes the fault lies with her, and what she was attempting to do is wrong. She does make one last attempt to "seal the deal" so to speak, and ends up being gravely hurt in the process.

The book itself is not a bad book, and once you get past the "eww" factor of a woman performing intimate acts with a wild animal, you see what the book is really about. During the course of the narrative, we find that Lou tends to give of herself with no expectation of getting anything in return. This can be said if her work life and her romantic life. Her relationship with the bear is symbolic of  her life, and you go through it wondering when she is going to wake up and realize that what she is doing is wrong. That point does come, and with it comes that realization that she deserves more out of life.

After I finished reading Bear, I closed the book and wondered, What was so great about that? It was okay, but hardly worthy of the award and praise it has gotten. But now that some time has passed and I've had a chance to look at it as a whole, I see how amazing the book truly is and how skillfully the author was able to encapsulate all aspects of this woman's life in that one relationship. I would highly recommend it.
Posted by Woofer at 2:12 AM