IT'S A BEAUTIFUL DAY IN THE NEIGHBORHOOD 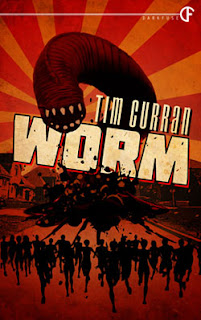 I didn't go to the movies a lot when I was a kid. To get my fix, I relied on the 4:30 Movie, which would have theme weeks, and at least once a month The Million Dollar Movie showed a classic horror film. And then there was always the movies shown later Saturday mornings/early afternoons. These were where I first saw movies like THEM!, The Deadly Mantis, Tarantula, etc., movies I fell in love with on first viewing, and movies I never get tired of watching. So naturally, when I saw the cover of Tim Curran's new novella, Worm, I knew I just had to read it.

Welcome to Pine Street, a typical street in a typical suburban neighborhood. It could be anywhere in the United States. It's the kind of street where, like it or not, everybody knew everybody else. The residents are your typical, everyday people. There's Tony, an unemployed schlep whose wife dotes more on the rugrat of a dog she calls Stevie than she does on him. There's the wholesome, all-American Girl Next Door, friendly and flirtatious. There's the feisty old lady, Bertie. There's Ivy and Geno, Kathleen and Pat, and a host of others, each living their humdrum lives on their boring little street. All that is about to change.

From deep underground, a stinking, black sludge starts to bubble up into the streets. It's rising up through the sewer pipes to fill bathtubs and toilets, kitchen sinks and bathroom sinks. It's rising fast, and by the time they think to get in their cars and trucks and get the Hell out of Dodge, it's too late, because not only is this sewage thick enough to bog down the most rugged of vehicles, it's also the home to hundreds carnivorous worms. Ranging in size from eels to pythons, these worms possess row upon row of needle-sharp teeth, just right for boring into some tender flesh. And somebody just rang the dinner bell, and these suckers never say no to a free meal.

Reading Worm, I was reminded of a couple of my favorite movies. It's a cross between Squirm and Tremors. It also brought to mind Keene's The Conqueror Worms, but unlike Keene's novel, which, while enjoyable, tends to have its slow moments, Curran's work is a nonstop onslaught of wormy action. But for all of the enjoyment I received while reading Worm, and for all the memories of my childhood it brought back of being glued to the television while some giant nasty laid waste to a town, I couldn't help but feel cheated after I finished. For all of Curran's thrills and chills as people fight to survive, he fails to deliver in one respect, and that's with the origin of the worms. Considering the size of the novella, there was plenty of room to expand this to a full-length novel had he he chosen to split the focus of the story between the events unfolding on Pine Street and those going on beyond this little community. We know what's happening on Pine Street is not an isolated incident, that it's happen throughout the town and authorities are in the process of evacuating people. Let's see what's happening on the outside, as well as underneath. Are these worms a natural occurrence, nature's way of striking back for all the wrongs we have committed against her? Are they a government experiment gone wrong? Or are the something dark, more sinister? Maybe even supernatural. The Devil's minions. We don't know, and it's frustrating. Had we been provided this bit of information, Worm would have been a more enjoyable read. However, since we aren't, I have no choice but to take off points.

Despite this one flaw, Worm is highly recommended. I've only read one other novel by Curran (Graveworm) before this, but I'll definitely be reading more, as Curran delivers the thrills and chills along with the best of them. He's a voice to watch.