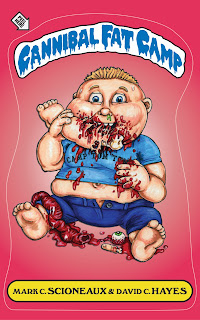 Sometimes the cover alone will make me pick up a certain book, and such was the case with Cannibal Fat Camp by Mark C. Scioneaux and David C. Hayes. Remember those "taboo" Garbage Pail Kids trading cards (a bastardization of Cabbage Patch kids)? I loved them only because they poked fun of those hideous dolls every went crazy over, so this was a "must have" for that alone. The fact that Mark's name was on the cover was a plus. Not too long ago I read The Glass Coffin: A Zombie Tale and knew he was name to watch.

Meet Miles Landish. A neglected 17-year-old rich kid who makes Jabba the Hutt look like a Victoria's Secret Model. Threatened with being expelled from school after being caught red-handed breaking into lockers and scarfing down other students' lunches, his parents are at a loss as to what to do. Food is controlling the boy's life, and something needs to be done. That something turns out to be Camp Tum Tum, an exclusive fat camp for the rich and spoiled. At Camp Tum Tum, supervised by a team of Health Nazis, Mile will learn everything he needs to take control of his life. Things spiral out of control rather quickly, however, when a case of corporate sabotage elsewhere in the world has tsunami effect on this small, remote island retreat. Just how far will a group of morbidly obese teenagers go to survive? The title says it all.

Let me start off by saying that Cannibal Fat Camp is not for everybody, especially if gross-out humor is not your thing. And I mean it when I say humor. Cannibal Fat Camp is hilarious—in a sick, twisted sort of way. It's so over the top that you can't help but laugh even though the scenes  as they play out are grounded in reality (You don't think so? Remember the 1972 plane crash that left a Rugby team stranded in the Andes? In order to survive their ordeal, they had to resort to cannibalism.). Combining humor and horror is never an easy, but Scioneaux and Hayes manage to do it successfully: The news and medical reports help keep the reader's feet firmly planted in reality, even if the doctor is a sarcastic SOB; the diary and journal entries allow the reader an insight into the characters that a standard narrative wouldn't allow; the letters home that Miles writes add a subtle humor to the story (and maybe that's an age thing), as the reader hears Allan Sherman and Lou Busch's "Hello Muddah, Hello Faddah" (http://www.youtube.com/watch?v=9jjiWS__Mp0) playing through their head; and the recipes? I was howling.

Despite the humor, there are elements in Cannibal Fat Camp that ring true to the world today: childhood obesity and bullying. Society is concerned with the rising number of obese children and tries to instill in children the need to eat right, but what you don't hear is an attempt to research and resolve the root cause of the obesity epidemic. The authors touch on that here as they attempt to find out the reason for Miles' food addiction. Miles himself claims not to know why he eats the way he does, but we can see it's a cry for attention. You would think that the ridicule he receives at school would be enough to make him turn himself around, but Miles doesn't feel he's worthy of trying to better himself. When his own parents don't seem to care, why should he? Subconsciously he's hoping his parents will wake up to what's going on and extend a caring hand. Nowhere is that more obvious than in the letters home, where Miles admits to being a disappointment to them and it's no wonder they wanted to ship him off, maybe to forget about him altogether. In truth, when we first meet Miles, we don't like him very much, but as we get a deeper insight into the character, our feelings change and we end up feeling sorry for him. We start rooting for him, hoping he'll be able to turn himself. The same cannot be said for some of the other characters, one in particular: Charles York. Charles is a take-charge type, and he's quick to assess the situation, but we soon realize that he's not all there mentally. The guy's a sociopath, and the more we learn about him, the less we like him.

One could argue that the pacing of the story was off, that "civilization" deteriorated too rapidly, but when you are dealing with undisciplined, unsupervised children, is it too hard to imagine that things could spiral out of control so quickly? Think back to when you were a teen and your parents left you alone for the weekend for the very first time. What was the first thought that ran through your head? PARTY!! And consider how quickly rioting and looting break out in times of disaster. No, the events that transpire are not that hard to imagine at all.

Well written with well-developed characters, Cannibal Fat Camp is an enjoyable read from beginning to warped, twisted ending that I would highly recommend. However, if you are in any way squeamish or easily grossed out, I would advise reading this on an empty stomach, otherwise you just might be running for the bathroom. Bon appetit!