SHOULD HAVE KEPT IT IN HIS PANTS 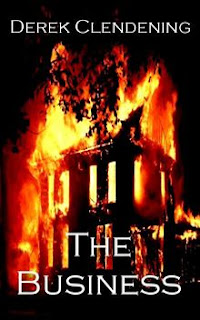 I'm not sure what prompted me to grab Derek Clendening's The Business—maybe it was a freebie download from Amazon, I don't remember—since I'd never read anything by the author before; all I know is it's been sitting on my Kindle for like forever and I figured it was time to read it. I should have put it off a little bit longer. Mercifully, it was a short read.

Twenty-five years ago, Roland McAlister was at the top of his game. He was a championship wrestler, had money in the bank, and a wife waiting for him at home—and a "rat" in every town he stopped in... and by rat I don't mean the rodent. That's what he called his hook-ups, his mistresses, the flavor of the day, which gives you some idea of what kind of guy Roland really was. In Detroit, there was one woman, Gloria, who he claimed to really have a connection with, but when she comes to him to let him know she's pregnant, she's out like yesterday's trash. There was no way he was going to be a father to this whore's little rugrat.

Jump twenty-five years to present day and Roland is just a shell of the man he used to be. Having suffered a heart attack, he is now confined to a wheelchair. Life is good, or as well as it can be given his condition. He has a wife who loves him (wife No. 3) and a steady income from some illegal dealings (steroids) on the side. All that is about to come crashing down around him when he receives a phone call. From Gloria's son. Who, after twenty-five years, wants Roland to be a Daddy to him. And he'll stop at nothing to get what he wants, and I mean nothing. The cover gives you some idea what extremes he will go to to get Roland to be his Daddy. The guy is a real sociopath.

The story in and of itself isn't a bad story, but it's a perfect example of an author who has cranked out a story and put it up on the Kindle self-publishing platform before editing and proofreading his work, and that's where the story suffers. Typos, missing words... and the most lethal mistake an author can make, Clendening lost track of which character he was talking about. *SPOILER ALERT* Cory, Gloria's son, has just killed Rosemary, Roland's wife. Being a good kid, Cory cleans up the mess before leaving Roland to think about what he has done. Yes, Cory thinks Daddy is responsible for Rosemary's death because all the old wrestler had to do was agree to spend some time with Cory, get to know him, be a father to him. If he had a greed to that, Rosemary would still be alive, but Roland had refused. Now, sitting alone, he decides to get to the bottom of things and reached for the phone. "I hadn't spoken to Rosemary in twenty-five years..." Hello? Rosemary is dead. Your son just blew her brains all over the sewing room. If you want to talk to her, you'd do better picking up a Ouija board than the phone. Clendening doesn't catch his mistake until the next scene, so during the entire phone conversation with Gloria, he's talking to Rosemary.

The ending itself is interesting, as the conversation with "Rosemary" reveals something that throws Roland for a loop. The thing is, you have the reveal, then nothing. It ends, and it leaves you wondering... What? How?

Had the story been cleaner, more polished, it would have been a decent read, but as it stands now, it's an embarrassment to the author and I would seriously recommend he unpublish it, polish it up, then re-post it. Until that time, this is one you should pass on.