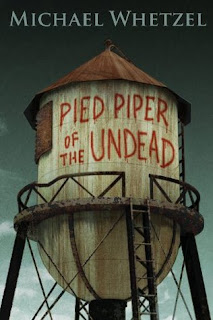 For those who follow my reviews, you know I have a new-found love for all things zombie; however, I find my interest in the walking dead waning fast, thanks in part to the flood of zombie fiction that has flooded the market. So much of it is poorly written, cranked out with the hopes of cashing in on the current literary trend. Because of this, I went into Pied Piper of the Undead with the lowest expectations imaginable. Thankfully, they were not met.

Pied Piper of the Undead tells the story of a 13-year-old survivor of the Zombie Apocalypse. As far as Peter knows, he is the only living person in his hometown. This would be hard for anybody, but for a child, it could be particularly devastating. Put yourself in the child's position—while on a scavenging run you encounter people you used to know, people you can put a name to, people you ran into on a daily basis, maybe said hello to, and now they want to eat you. Your best friend, the girl at school every guy wanted to be with, the school lunch lady, and yes, even your parents. This is what Peter has to endure on a daily basis. When we encounter a zombie, we see it through the boy's eyes, and unlike like so much zombie fiction, they aren't The Monster, The Zombie, or The Biter, or whatever naming convention that author has assigned to his walking dead. Whetzel has chosen to assign every zombie a name, a former occupation, which is what makes Pied Piper of the Undead so emotionally jarring. It's almost as if Peter hasn't fully grasped the fact that these things are no longer the people he used to know. On one level he does, as is evidenced by the fact that he stays above ground level whenever possible, choosing to live on the platform of an elevated water tower, but on another level he seems to be in denial of those whole situation. This is particularly evident when he encounters his best friend and his parents. If you have a heart, these scenes might very well bring tears to your eyes.

Again, if you follow my reviews, you're waiting for the "But...", and there isn't one. Some aspects of the story might have some readers rolling their eyes, like how Peter knows to stay off the streets and how he successfully manages to get around town, but given the boy's fascination with hand-held video games, it doesn't come as any surprise that he has figured this out. As far-fetched as it might seem, it seems perfectly logical within the confines of the story, and something I didn't even bat an eye at. It just shows the ingenuity of a child and the extent to which his imagination can stretch in order to survive.

Given the nature of the story, I can't really say too much about it without giving anything away. Suffice it to say, I enjoyed the story immensely and... Oh wait... I lied. There is a "but", one problem that I had with the novella that could easily be rectified if the author sees fit to humor this reader and correct the problem.

The one problem I had with Pied Piper of the Undead is the ending. While satisfactory, it does leave you hanging, and this reader wants more, so I can only hope Mr. Whetzel decides to continue the story. Other than that, no other issues. Surprising, huh? I would suggest, however, that the author clean up the language a little. Not that I'm a prude or anything, I just feel that by doing so he would make it more appropriate for a YA audience. Should he do that, and extend the story to novel length, he just might give Maberry's Rot & Ruin a run for its money. Pied Piper of the Undead is that good. Highly recommended.
Posted by Woofer at 9:55 PM