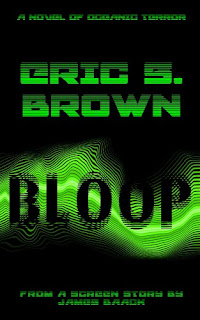 If you're a Bigfoot fan, then you are probably familiar with Eric S. Brown, author of the Bigfoot War series. He's written other books outside of the Bigfoot series, but I haven't read them. Some of them are cross-genre horror/westerns, and I'm not a fan of westerns (I'll get to them eventually, but they aren't high on my list), and others are zombies (I'll get to those, too—they're a little higher on the list), and now it seems he's branching out with novelizations of screenplays [Boggy Creek: The Legend is True (for my review, see http://www.wooferslair.blogspot.com/2013/01/theres-something-out-there.html)]. Bloop promises to be one of the latter, although is says "screen story" on the cover, which to me means it's in the works. After having read Bloop, I can only hope the film never sees the light of day. Then again, maybe it will be a rare instance where the movie is better than the book.

Bloop starts off with a group of Charlie's Angels-type mercenaries, The Sisterhood of Saint Tommy Gun (yes, I did roll my eyes at that), taking on a marauding pack of yetis. If you're familiar with the Bigfoot series, you'd expect all of these little girls to be slaughtered by the yetis, but that isn't the case. The Sisterhood wins the day, without a single broken nail or a hair out of place. Oh, and no casualties. I guess the yetis aren't as formidable as the American cousins. Battle won, the Sisterhood just disappears. Who were these masked women? We want to know more about them, but alas, the story jumps elsewhere.

Where does it jump, you ask? To the middle of the ocean, where a yacht is about to be attacked by some sort of sea monster. What kind of sea monster? We don't know. The extent of the description is that it's serpentine, has armor-like scales, and sharp teeth. Oh, and it's hungry. We learn this because no one on board the yacht survives. Really? Even Godzilla had one survivor. How else did we come to learn about the giant lizard that ate Tokyo (actually, NYC comes to mind—yes, I'm thinking about that "God-awful" Matthew Broderick film, which isn't really all that bad if you don't think of it as "Godzilla", but I digress).

The scene jumps again (I'm beginning to get a little dizzy with all this globe-trotting jumping around), this time to a college campus, where a bored professor is slurping his cold coffee while he lulls his students to sleep. Said professor is the leading authority in the hazards of environmental corruption on the natural world (we knew he had to show up sometime). An associate interrupts his class (how dare she!) to let him know the military is waiting for him (déjà vu here, folks). What could they want with him? Duh! Obviously he doesn't read the news. Oh wait! Military coverup. Gotta keep this under wraps. Convenient that no one survived. Our hero learns about this creature, whatever it is, and then it becomes a race against time to destroy the big, bad monster before it attacks again. Do they? Well, no, but then again, do we, as the reader, care? Again, no. And yes, Charlie's Angels do make another appearance, if you care to know, but I'm not going to say anything else.

Where do I begin? There's so much wrong with this book, I don't know where to begin, but I gotta start somewhere. One of the first things I noticed with Bloop is the narrative structure. We start off with a Prologue, but we never know where the Prologue ends. We have "****" to indicate a jump in the story, but we don't know where it actually starts. I was constantly on the look out for "Chapter One" or "1" or something to let me know, "Okay, folks, we're starting." That never happens, so the novella reads like one giant Prologue.

The second thing I noticed was the manuscript the lack of editing/proofreading (if it was, Brown needs to fire the party(ies) involved and get someone new). Nowhere is it more obvious than with character names... Well, once character in particular—General Waltson. Or is it Walton? It changes constantly throughout the story. Brown refers to a ship named the "Author Curry", and Driscoll even smirks at the name, as if he's in on a secret no one else is privy to. Given Brown's love of comics, I believe he meant "Arthur Curry", aka Aquaman. Elsewhere in the book, a reporter slips past the MPs to ask our hero, "Why has the military but you in on this?"

The story also suffers from a lack of detail. After having read it, I still have no idea what this creature looks like other than it's an armor-plated serpentine creature with sharp teeth. I have no idea how big it is, or what it is. Are we dealing with a genuine sea serpent? Given the environmental aspect introduced earlier with the introduction of Driscoll, are we dealing with a giant, mutated eel or sea snake? Or do we have a remnant of prehistoric times along the lines of Nessie and Champie? It's plausible, given Brown's previous works. I mean, after Bigfoot, why not tackle another legendary creature? had this been a short story, this is something I could forgive, but even then, the reader needs a little more to go on. Given that this is an attempt to take it longer than a short, but not quite achieving novel length, you need to give the reader more. In any movie that falls into this giant creature sub-genre, you always learn what the creature is and where it originated from. That's not so here.

This same lack of detail carries over into the world Brown attempts to create. Not once could I envision where I was supposed to be, and that's something I can usually do when I read. And the characters? Who cares. They are cardboard cut-outs, stock characters typically found in this type of story. There's no character development, and no back story to breath life into them. We know nothing about them, so why should we care about what happens to them? Brown's main focus is story—this happened, then this happened, then this happened, and as a result, the story suffers. The structure of the story as it is currently written doesn't even provide the element of suspense.

I know we're dealing with fiction here, so don't go jumping on my case for what I'm about to say, but where Bloop is concerned, there's no essence of reality. By that I mean the world has not become real for the reader. There are a couple of factors behind this. One is the lack of detail. The other is dialogue. If you've read Brown's work, you know he is not one to shy away from the gore aspect. Granted, it is not rendered as vividly as some authors tend to do, but it is there, so why is he so afraid of vulgarity? You will not find a single "fuck", "damn", or "hell" in his books, which in and of itself is not a bad thing, but there are times it's expected. Case and point, we're dealing with military men here in a combat situation, so when one of them blurts out, "What the frag do we do now?", you can't help but laugh. Frag? Really? Who the hell says "frag"? It totally knocks the reader out of the story, which in this case isn't too hard to do. If you don't want to use the "f" word or the "h" word, leave it as, "What do we do now?" That tends to be a little more realistic than using something like "frag".

I feel part of the problem with Bloop lies in the fact that it is based on a "screen story", so Brown is probably adhering to the story as it was given to him, to the letter. He's not putting his own spin on it, adding insights to the novella (yes, folks, it's very short—this review is probably longer than the "book"), or adding any details. Had he approached this as an original work, I think we might have seen an entirely different story.  Having read some of Brown's other works, I was hoping for so much more with Bloop, but what I got does not live up to what I know Brown can do. He failed to deliver here, so unfortunately, this is not one I can recommend. You'd do better to check out his Bigfoot War series.
Posted by Woofer at 12:18 AM