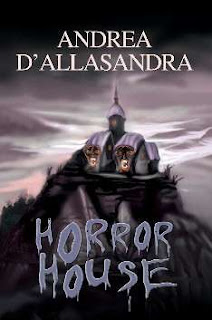 It's been three years since the massacre at Death House. Now a New York firm owns the property and is attempting to re-open the luxurious house and someone ain't happy about it. That's right, folks. Everybody's cross-dressing master of mimicry, Benji, is back.

Even if you've only seen one slasher film, you'll know what to expect from D'Allasandra's follow-up to Death House. That should be part of the fun—but it isn't; in fact, it's one of the reasons why this book fails. She (actually he, as Andrea D'Allasandra is actually Jery Tillotson) isn't concerned with character development because she knows she's only going to kill them off. Her only concern is to keep the story moving, but even that gets stale after awhile.

The characters in Horror House are poorly developed stereotypes, all of which you hope get killed off soon just so you don't have to deal with them anymore. Take Scotty, for example. The only gay character in the book. A flamboyant ex-stripper/GoGo Boy trying to live the legitimate life because he's fallen in love with the nerdish professor, Charlie (who never makes an appearance), yet like ALL (yes, I am being sarcastic here, so don't start sending me hate mail) gay men, he wants to screw every guy he sees and is constantly fantasizing about seducing Tyler, the straight, jock-type security guard. While the author tries to make him the likable comic relief, his over the top characterization makes the reader hope he's one of the first to go. One of the other problems with D'Allesandra's characters is that she pulls things out of thin air whenever it's convenient for that point in the story. Scotty thinks with his dick, but then all of a sudden he's got this soft spot for kids. Josie Jetson, a successful author of cookbooks who looks more like Honey Boo Boo's mother than Martha Stewart, is an abrasive, obnoxious bitch who hates everyone—but has a soft spot for kids. And why are kids their Achilles' Hell? Because Benji "adopts" an abused child, who then becomes a tool to catch his victims unaware. When you look at the entire cast of characters, there really isn't a likable one in the crowd, not even the sheriff, the only carry over from the first book. The "good guy" has been reduced to a conceited strip-o-gram cop who literally masturbates while watching himself perform in a home-made bisexual porn flick he made with another sheriff and the man's wife. Somebody give me a happy ending and shoot this guy—quickly.

Since the characters aren't enough to keep you interested, you pray the story itself is enough to hold your interest, but unfortunately, it isn't. There's nothing new, nothing fresh, but you plod on hoping that one of the characters will be killed off in an interesting, unique manner. Don't hold your breath. Not even the writing is enough to keep the reader engaged because it is very poor. One has to wonder if D'Allesandra accidentally submitted a first draft instead of the polished, final version because Horror House suffers from the same thing so many other self-published books suffer from—poor or no editing. With clunky sentence structure and needless repetition, it becomes painful at times to read.

I really wanted to like Horror House, but unfortunately I didn't, and I can't, in good conscience, recommend it. There are so many other self-published books out there you can spend your time with.