There's Something Out There 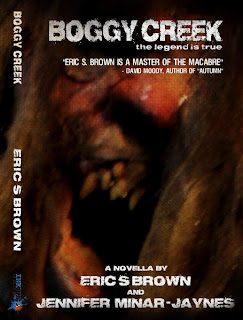 I don't know what it is about Bigfoot, but I just can't get enough of the big oaf. When I was a kid, I remember watching the infamous Patterson-Gimlin video. I was going to be the one who found the irrefutable proof that Bigfoot existed. I said the same thing about the Yeti and the Loch Ness Monster, too. To this day, I still find the legend of Bigfoot fascinating, and yes, I watch Finding Bigfoot, I'm not ashamed to admit it. And that's why when Eric S. Brown comes out with a new book I'm usually one of the first ones to buy it. The man writes Bigfoot. Not the shy creatures hiding out in the woods that we've all heard about, but vicious, man-hating, man-eating terrors of the deep woods.

This outing, Brown teams up with Jennifer Minar-Jaynes to give us Boggy Creek, The Legend is True, a novelization of a film by the same name, which I haven't seen yet — but it's on my list. Brown doesn't waste any time getting to the meat of the matter, so to speak. Boggy Creek opens with a rather nasty attack on a young couple parked in the woods. Casey Guthrie is savagely mauled and his girlfriend, Brittany, is among the missing. Missing? Yeah, Brown finally went there without actually going there. Seems that's the MO of these Bigfoot attacks — the men are killed, the women abducted. You do the math. Anyway, back to poor Casey. It's a powerhouse opening to a fun read.

As it turns out, Casey and Brittany aren't the only victims of these random animal attacks. Yeah, you heard me. Seems the local sheriff knows what going on, but refuses to do anything about it because of some misguided sense of duty. It's his deputy, Mark Klein, who finally grows a pair and decides enough is enough. He and his redneck friends decided to hunt the beast down.

Meanwhile, enter some would-be college freshmen. Jennifer Dupree and her friend, Maya, are headed to Boggy Creek for a little rest and relaxation. Jennifer is actually coming to lay the past to rest. Her fathered lived in Boggy Creek until he met his maker in a freak accident (or did he? We're never told what exactly happened to her old man). Unbeknownst to Jennifer, Maya has planned to make this a partying weekend, and thus the scene is set. Now the question becomes: Will Jennifer and friends survive their week in the wilds of Boggy Creek, or will they become meat for the beast?

Let me start off by saying Boggy Creek, The Legend is True is not a great book, but it is well written (barring a few errors that I'll get to later), and it is fun. I mean, it's Bigfoot; what's not to like? Given the length of the novella (a mere 120 pages), it's perfect for a lazy Saturday afternoon in front of the fireplace. Notice I say afternoon. If you live in the city with not a tree in sight, feel free to curl up in bed at night, but if you, like me, live in or near a wooded area, it's best to read this during daylight hours. The scare factor isn't high, but the suspense is there. The authors have the ability to draw you into the story, so much so that you'll be jumping at those unexplained sounds outside. Is that really a branch scratching at the window, or something else?

The cast of characters in Boggy Creek, The Legend is True is your typical slasher fare: creepy neighbor, gruff sheriff, inept deputy, partying coeds, and a host of cannon fodder. Regardless of their role, the authors treat them all with the same attention to detail, fleshing them out and making them real. They give that same attention to his scenic descriptions as well, fully realizing the locales, thereby making it so easy for the reader to lose him- or herself in the narrative.

For all the pluses in this novella that make it a fun read, there are a few glaring errors that were enough to jolt me out of the story and had me flipping back to double check to see if I had misread something. In the very beginning — remember Casey and his girlfriend? — the couple is sitting in the front seat of his pickup. Yet a few paragraphs in, the monster leans into the car. Wait a minute? Didn't you just say they were in a pickup truck? OOPS! (Bad editor!) When Jennifer arrives in town, she and Maya pass a sign that says, "Boggy Creek, Texas. Population 406." Later on when the sign is passed, it reads, "Boggy Creak, Texas. Population 421." Whoa! Wait just a cotton pickin' minute! Was there a baby boom within the past 24 hours or so? And is the highway department that much on top of things that they were out there putting up a new sign so quickly? (Very bad editor!) And a little later on, when Jennifer meets the creepy neighbor, he says his name is Dustin Long, but two chapters later, during a flashback, he name is Dustin O'Brien. (Very, very bad editor!) Yeah, he may have given her an assumed name, but if he is supposed to be concerned for the girl's well-being, especially after what happened to his wife, why lie? More importantly, we aren't told that he lied. The average reader might not notice these things, but to me they were glaringly obvious and enough to break the flow of the story. There were a few other things that I can't recall at the moment, which means they weren't enough to knock me out of the narrative.

The only drawback to the book is that the authors didn't give us a look at Bigfoot other than through the eyes of the characters. They put us in the creatures head when it is about to attack, but doesn't give us a peek at the "homestead". Are the ladies being dragged back to the lair in a Neanderthal-type manner only to be served up as a midnight snack? Or are they, as is insinuated within the text, being used as breeding stock? Inquiring minds want to know these things. Is there a "I had Bigfoot's baby" story in the future? One can only hope.

All in all, though, I have to say that Eric S Brown and Jennifer Minar-Jaynes delivered a solid and enjoyable story, a must for Bigfoot fans. Highly recommended!