ROCK AND ROLL WILL NEVER DIE! THE FANS ON THE OTHERHAND. . . 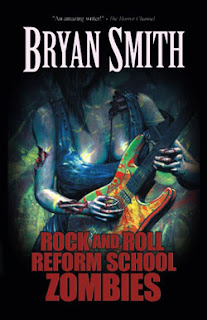 They just don't understand their own kids and the need to be able to express themselves. They want their kids to grow up to be clones of themselves. And as long as you have parents like that, you will have the need for schools like the Southern Illinois Music Re-Education Center, a private institution dedicated to brainwashing the young adults placed in their care by frustrated parents; however, if those parents only knew the atrocities that were being inflicted upon their children—psychological abuse, rape, and murder—they just might regret their decision to force their children to conform by any means necessary.

This is the setting for Bryan Smith's Rock and Roll Reform School Zombies, which in itself might seem bad enough, especially for those confined within its walls, but all hell is about to break loose.

Melissa Campbell doesn't think things could get any worse. Torn away from her boyfriend and enrolled by her parents in the Southern Illinois Music Re-Education Center, she never expected to be raped by one of her teachers. She's the lucky one because at least she didn't catch the eye of the headmistress. If she had, she might very well be six feet under, a journey one of her housemates has already made, and another who is in the process of making that journey. You see, not only does the headmistress have an eye for the young ladies, she has a taste for hookers and a taste for murder, the ultimate climax in her twisted sex games. Not wanting to face her attacker again, Melissa sneaks a phone call to her boyfriend, pleading with him to come get her and take her away, but afterward she doesn't think that he's going to come through for her, so she has to rely on her one friend in the house to help her get out of there.

Little does Melissa know, her boyfriend, Wayne Devereaux, and his best friend, Steve Wade, are on their way to get her out of there. Neither has a clue as to what they are getting themselves into, only that Melissa is not happy where she is. As they head toward the school, a meteor burns through the sky, crashing into the fields not too far from the school. Meteors crash into the earth all the time, right? So as long as they don't land on you, no harm done, right?

Whether it's from the radiation or some sort of bacteria released upon the meteor's entry into the earth's atmosphere, four dead girls rise from the grave with a hunger for fresh meat. And as is the way with all things zombie, the population begins to grow exponentially, kinda like that old Faberge commercial—they told two friends and they told two friends and so on and so on—and before you know it, the house is overrun with the living dead.

Will Wayne and Steve get to the house in time to save Melissa, or will they become zombie chow before they get through the front door? Will Melissa gain her freedom from the torments of the house, only to become the main course in a zombie smorgasbord?

I wasn't sure what to expect with Rock and Roll Reform School Zombies. I mean, years ago I rented this movie called Hard Rock Zombies, and it turned out to be a bad, campy movie, and even though I knew Smith's novel was classified as horror, I wasn't sure if this was going to be a serious horror novel or something on the quasi-humorous side. I quickly learned that I had nothing to worry about.

Unlike most of the zombie fiction I've been reading, Rock and Roll Reform School Zombies starts at the beginning. There are no zombies running amok when the book starts, and it isn't until the meteor passes that the dead start to rise from their graves. It harkens back to Romero's Night of the Living Dead when news commentator is asking one of the scientists what might have started it all. I was glad to see that, with one or two exceptions, Smith treated zombies in the more traditional manner—mindless shamblers with a hunger for flesh. Had they the more modern twist that seems to be invading so many of the zombies films I've been seeing, i.e., zombies that could easily beat out the fastest runner of the Boston Marathon, I doubt I would have finished reading it.

I also found it interesting that the only likable characters in the book are the kids; they are fully fleshed out and you find yourself rooting for them as they go up against the zombies. Smith's adults, on the other hand, tend to be flat cardboard characters, the bad guys with no redeemable qualities whatsoever. You are meant to dislike them, and Smith goes to the extreme to make sure you don't. You want to seem them fall prey to the walking dead; they are so bad that you don't even want to see them come back as zombies, but as is the nature of the living dead, you know they will. And they do, which only serves to fuel the survival instinct in the kids. I could very easily see a smile on the faces of these kids as they send the zombies back to the hell they came from, especially after they made their lives a living hell when they were alive.

I genuinely liked Rock and Roll Reform School Zombies. Bryan Smith has created a fun, fast-paced tale of the dawning of the zombie apocalypse, and I would definitely recommend it.
Posted by Woofer at 9:07 PM