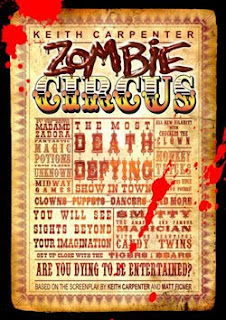 As I continue my search for the next great zombie novel, a friend of mine loaned me a copy of Keith Carpenter's Zombie Circus: The Most Death Defying Show in Town. It was something I had spotted on Amazon and made a mental note to check out when the price came down. At 166 pages, I found paying ten bucks for the Kindle version a little hard to swallow, and forking over twenty bucks for the paperback even harder to swallow. I got burned once paying a high price for an unknown, and after having read Carpenter's little novel, I am so glad I didn't shell out the money for it, which is really sad because I wanted to like this book more than I did.

The book starts out in the town of Ashbrooke in the year 1946. Ashbrooke is a little backwater town, heavy on the religion, so when the Fink and Zimner Freak Show and Circus roll into town, a majority of the town folk were downright furious that such a shameless display of the evil and debauchery should set up tents in their little town, and they had every intention of making their feelings known.

The circus folk, however, are well aware of how the town folk feel, as they were greeted with hostility every time they passed through. So what makes them think this year is going to be any different? They don't, but they came prepared with the Apa Vie, a tonic that promised a good long life if used properly. Madame Zadora is against the selling of the Apa Vie because she knows what can happen should it fall into the wrong hands.

When the town folk, led by the less-than-holy Pastor Harry Farwell, and the circus folk meet, things get a little out of hand. Well, that's an understatement. Things actually go to Hell in a handbasket, and by the time it is over, all but one of the circus folk are dead, and the pastor has had his hand severed. In the skirmish, the pastor has the misfortune of being splashed with the Apa Vie, and by the next day, his hand has grown back, which he takes as a sign from God that he has done the right thing.

Jump sixty years later, and another circus is pulling into town. This time around, the majority of the town folk are looking forward to it, but there is one man who would love nothing better than to run them out of town—the local sheriff. The circus sets up on the same grounds where the previous circus met their end, and the only thing still around from the previous performers is a decrepit caravan wagon—and a case of Apa Vie. When the Apa Vie bottles are broken and the mystical fluid seeps into the ground, it reanimates the charred, decaying corpses of the previous circus, and they rise up seeking revenge.

Can the town of Ashbrooke survive the wrath of the Circus of the Damned?

As I said earlier, I really wanted to like this more than I did. I like the premise behind it, as it brings to mind campy classics like Hard Rock Zombies and Killer Klowns from Outer Space, and if the circus aspect has been done before in a zombie novel, I haven't come across it yet. So what was wrong with it? For one thing, the characters come across as cardboard cutouts, stereotypes of the kind of character they are meant to be, with very little development to flesh them out. They lack dimension, and the words that come out of their mouths are so stilted it's laughable.

In addition to the dialogue being laughable, the book itself is painful to read in places. The author does not seem to have a grasp of basic writing skills, as there are run-on sentences, mixed tenses within a sentence, misspelled words galore, all evidence that this book wasn't placed in the hands of a proofreader or editor. Had it been, the book might have been elevated to an enjoyable read.

Aside from the actual writing, I also found situations in the book to be very contrived, something that might have been forgivable had the book been better written. A group of survivors are holed up in an old church, and when they have the chance to escape, they move to the back of the building, where there's a convenient secret door that will lead them outside. Obviously it wasn't so secret if they made right for it. There's a zombie monkey crammed into the glove compartment of a car, ready to spring like a blood-hungry Jack in the Box. How the hell did it get the car door open, climb into the glove compartment, and pulled the panel closed?

As poorly written as the book is, I can't say it was all bad because I did like the idea behind it. As I was reading it, it brought to mind John Carpenter's The Fog, a movie I love. Is it worth reading? If you don't mind a book that reads like a very roughly written first draft, because that was my overall impression of the book, I'd say, "Go for it." However, if you are put off by poor writing, this might be one to skip.