God Bless Us, Everyone! 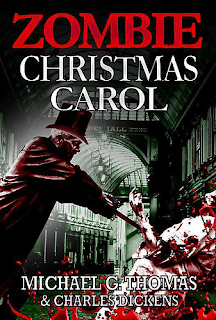 Having read a few zombie mash-ups of other literary classics, I swore I would never read another one. It's not so much that they're badly written; it's just that the zombie element doesn't add anything to the story. It's kind of like watching Lucas' reboots on his original Star Wars films—it's painfully obvious where the new footage was added, and you find yourself wondering why he had to go ahead and mess with perfection. So why, after swearing off zombie mash-ups, did I have a sudden change of heart and tackle this one? Because I love A Christmas Carol, and I was hoping against hope that the author was able to rise to the challenge and deliver something spectacular. What I found was no different than others I have read.
I'm not going to bore you with a rehash because I'm sure you are all familiar with Dickens' classic tale, be it from Mr. Magoo, The Muppets, or any of the hundreds of countless movies aired every Christmas; what I will tell you is that the only thing lacking in Michael G. Thomas' spin on things is a substantial amount of zombie action. We get through the first half of the book without seeing a single member of the Walking Dead class. They are mentioned; in fact, we find that they are the cause of Jacob Marley's death, but the threat had been entirely eradicated and nobody has seen a single zombie in the seven years since his death. We don't really see any zombies until Scrooge is visited by the first of the three spirits, and it is then that we learn of Marley's death, which could have been avoided if he hadn't been so damned greedy. The threat of another zombie invasion is hinted at when our beloved Ebenezer is visited by the second of the three spirits, but we don't get the full-scale invasion until after the third spirit has come and gone and Scrooge wakes up to realize that the spirits were able to do it all in one night. And thanks to what Scrooge witnessed during his visitation with the spirits, he knows exactly what needs to be done in order to put the Walking Dead to rest once and for all.
The one thing that stood out for me in this retelling is Thomas' attempt to explain the current zombie outbreak. We don't see any of the usual causes for the dead rising. There is no meteor shower and no failed government experiments. What we do see is a religious cult that possesses an artifact that allows the person who touches it the power to control the dead. This opens up an entire subplot that, unfortunately, isn't fully addressed in the book. If it had been, I might have enjoyed the book more than I did. The only thing Zombie Christmas Carol was able to accomplish with this reader is to strengthen my conviction that the classics need to be left alone.
Posted by Woofer at 7:53 AM