A MISH-MASH OF MONSTERS 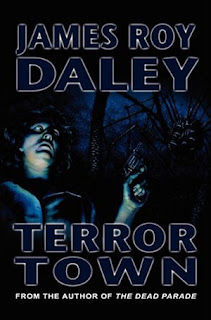 It's rare for me to sit back after finishing a book and wonder what I just read. Unfortunately, James Roy Daley's Terror Town had me doing just that, which is sad because the book started off with such promise.

Daley paints a portrait of a picturesque little town, but like most towns, no matter how quaint they seem on the outside, there's always a darkness that lurks in the heart of some, if not all, of its residents. Of all the town's resident, Nicolas Nehalem has perhaps the darkest heart. Despite the worn exterior of his house, the interior is meticulously maintained, which only serves to deepen the horror of what lies beneath. Beneath the cellar, in a subcellar of his house is a torture chamber with two occupants.

It's obvious from their physical condition—caged, with missing fingers and toes and emaciated to the point their ribs are visible—that Olive Thrift and Cathy Eldritch have been held captive in Nehalem's Chamber of Horrors for quite some time.

Daley makes it a point to emphasize the third cage in his description of the subcellar, and Nicolas' apparent displeasure that the third cage is unoccupied. This sets the stage for what could be a thrilling psychological horror novel, but you are left wondering what this has to do with the book's description, which promises vampires and zombies.

Daley then introduces the reader to Daniel McGee, a summer resident of the town of Cloven Rock. He is in the process of renovating his home with the hopes of making it a full-time residence. While working in the basement, he discovers the existence of a sub-basement, which he proceeds to explore. However, upon his initial attempt to check out the place, he never reaches the bottom. The sudden drop in temperature combined with the impenetrable darkness and the mysterious sounds propel him toward the surface. Right away you assume this might be the lair of the promised vampires, but no. When Daniel returns in the company of friends to continue his exploration of the basement, he uncovers the lair of the mutated spider/crab hybrids, one huge one and a bunch of smaller ones that have hatched from a bunch of egg sacs.

One of Dan's friends is devoured by the huge monstrosity, and another of his friends has been bitten and stung by the creature. The bite or the sting, it's never clear which, triggers a metamorphosis, and the young lady turns into a rage-filled lunatic who turns on her friends. But that's only the beginning. Shortly, she becomes encased within a cocoon, within which she undergoes a physical transformation and sets out on a bloody rampage.

So where, you might ask, do the promised zombies and vampires come into play? Disappointingly, they don't. Cameron, the young lady who was bitten by the creature, transforms into a vampire-like creature, but actual vampires? Not in this book. And there is not a zombie in sight. Those who Cameron bites become enthralled to her and do her bidding, but I would hardly call this a zombie. A vampire-like servant to the vampire-like creature? Yes, but zombies? That's pushing it.

The fact that the book does not deliver what it promises is a disappointment and a failure, and it's the first of many in Terror Town. The first major failure, in my opinion, is the number of monsters Daley attempts to incorporate in this novel. Sadistic killer, mutant spiders, vampire-like creatures and their servants. It's too becomes too much; the reader ends up rolling his/her eyes and thinks, "Okay, what else is he going to throw in here next?" Sometimes less is more. Pick one baddie, two at the most, and go with it.

Another fail in this book is the excessive gore. I'm not usually one to complain about the amount of blood and guts spilled in a book—I loved the whole extreme horror of the Splatterpunk movement—but it needs to be done well. The descriptions contained within Daley's novel are almost laughable, with the skulls that broke with a POP! It's like a bad B movie where they want to see just how far they can go to sicken the viewer (reader), but in the end it becomes a joke. Think Dead Alive, one of the goriest movies ever made; the blood fest is so excessive you can't help but laugh at it. It's almost as if Daley is attempting to overachieve in order to detract from the sloppy writing. Notice I said sloppy, not bad.

While the book on the whole is not badly written, it is in desperate need of an editor and a proofreader to clean up the text. Daley, in his attempt to creative as graphic an image as possible, tends to overwrite. When describing teeth, he says they are "like needles, like knives." Needle brings to mind images of a rattlesnake with their thin, venom-injecting fangs; knives generate an image of pointed, wider, dagger-like teeth, the teeth of a carnivore. Pick one, needle or knives, not both.

Another area where the book could have benefited from an editor/proofreader's eye is with author's misuse of words and the cleanup of additional words contained within sentences. There are numerous instances where the wrong words have been used—"option" where it is clear "opinion" should have been used—and repeated instances where additional words appear in within a sentence, for example, "he pointed it the gun at". Happening once or twice can be forgiven, but the number of times this type of error occurs is sloppy. There's also a point where Hellboy, William's pure-breed boxer is described as having a stumpy little tail, typical of boxers, but later on, when the creatures are struggling to emerge from the basement, the dog is described as have its tail between its legs. Last time I checked, a stumpy little tail couldn't drop between the legs.

Had the manuscript been turned over to a trained eye, what turned out to be a barely passable read could have been elevated to an okay read. Had Daley tightened up his story line a little more, choosing to keep his creature count to a minimum instead of the Monster Mash it was, the okay read might very well have made the move to a good read. But as it stands now, it's just a mish-mash mess that should be passed over, not passed on.