Tales of the Zombies Grimmer 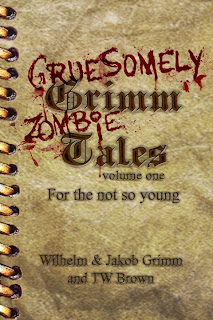 Ever since reading Tanith Lee's Red as Blood, or Tales from the Sisters Grimmer, I'm always on the lookout for twisted and perverted forms of the traditional fairy tales, which is why when T.W. Brown's Gruesomely Grimm Zombie Tales was published by May December Publications, I just had to get it. I was so excited that I moved it to the top of my pile of books waiting to be read.

Normally when reviewing a collection of tales I would touch on each of the stories within the collection; I am not going to do that here, partly because there are 25 of them, and partly because most of the tales are so brief I fear I would be giving too much away.

For the most part, I enjoyed T.W. Brown's re-imaging of the Tales of the Brothers Grimm, I just wish I was more familiar with all of the Grimm's Fairy Tales. The tales are all well written, and keeping with the style of the original tales, they are all simply written, which I liked. But my excitement at the prospect of reading twisted fairy tales waned a little the further I progressed into the collection. Part of it had to do with my lack of familiarity with the complete works of the Brothers Grimm. Brown does provide the original titles for the tales retold in this collection, but the titles are given in their native language, and not knowing German, I had some difficulty telling which tale was being rebooted. Some of them were obvious, such as Hansel and Gretel, others not so obvious. Were I more familiar with the original works, this probably would have been an easier task.

My other issue with the collection is that all of the tales had been updated. They are all set in a post zombie apocalypse world, and that wasn't what I was expecting. What was I expecting? The original tales in their original settings, only with zombies. The current flood of zombie mash-ups currently available set me up for this disappointment. I admit that Brown, to some extent, did what I was so hoping these other authors would have done when writing Pride and Prejudice and Zombies, The Undead World of Oz, etc., and that was rewrite the story entirely, including the zombie elements, thereby making it his own; he didn't take the original text and tweak it slightly and insert paragraphs throughout to bring in the zombie element, so for that I applaud his ambitious undertaking. My only wish is that he retained the original setting of the tales.

With that being said, I had to force myself to forget that these were reboots Grimm's Fairy Tales with zombie elements and approach them as short tales of the zombie apocalypse. Once I was able to do that, I found I was able to appreciate the stories more.

I don't wish to detract from Brown's ambitious effort here. The fact that the cover emphasizes "Volume One" leads me to believe it is his intent to "zombie-fy" the complete works of the Brothers Grimm, so I applaud him for undertaking this project. Will I pick up Volume 2 when it is published? More than likely, yes, now that I know what to expect and what not to expect. As I mentioned earlier, the stories are all well written, and since the style in which they are written mirrors the simple telling of the original tales, it makes for a quick read. Perhaps, by then, I will have better familiarized myself with the complete works of the Brothers Grimm.

Whatever failings there are to appreciate this collection for what it is are strictly mine because of my lack of familiarity with the original tales and for delving into the volume with preconceived expectations. If you are a fan of all things zombie, this is something you should consider adding to your collection.