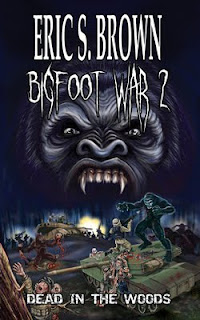 The town of Babble Creek has fallen to the fury of Bigfoot, the population decimated. For those of you who have read Eric S. Brown's Bigfoot War, this is old news. But the fall of Babble Creek was only the beginning.

In the neighboring community of Jackson County, the citizens are unaware of what has befallen the residents of Babble Creek. Nor are they aware of the Hell that is about to be unleashed on their own community. But the quiet community has more to fear than the invading Bigfoot horde, for it seems those who have been attacked by the creatures have become infected with a virus, a virus that turns them into mindless savages with a insatiable craving for warm flesh. As the battle rages, the townsfolk not only have to defend themselves against the fury of the furry army, but against people they had once considered friends. Will Jackson County survive, or will it suffer the same fate as Babble Creek?

Since I had already read and enjoyed Brown's Bigfoot War, I was quick to purchase Bigfoot War 2: Dead in the Woods and move to to the top of my reading queue, although to be honest, I wasn't expecting much. In the first installment, Bigfoot lays waste to a small town. I expected more of the same, which in itself wouldn't be a bad thing. I mean, Bigfoot War was B-movie fun, non-stop action and loaded with blood and guts. In short, my kind of book. But with Part 2, Eric S. Brown realized that if he wanted to keep his audience, he needed to deliver more than what he already given us. . . And deliver he does.

When Brown takes Dead in the Woods to the next level by pulling in a currently trending element in today's horror fiction, I thought I was reading a faulty copy of the novel, that maybe an excerpt of another novel had accidentally been pasted into this one when it was being formatted. It came so out of left field, I sat there with a "What the f...?" expression on my face. Nevertheless, with a roll of the eyes, I persevered, quickly realizing that he was trying to pull in a new audience with this element. Combining these two elements in the one book is a bit far-fetched, but it does make for a fun read. I mean, if Bigfoot exists, why not?? I'm not going to spell out what else is introduced, but you can probably figure it out.

Like its predecessor, Dead in the Woods is non-stop action. It also stands out in that it does not follow formula. There is no designated hero or heroine; everybody is fair game in Brown's Bigfoot series, so be forewarned, don't go getting attached to any particular character, because they just might not make it through to the end.

The only drawback I had with Dead in the Woods was with the proofreading. There aren't many errors, but the ones that there are were enough to make me stumble while reading it, pulling me out of the flow of the story. That aside, is Bigfoot War 2: Dead in the Woods worth reading? I think so. It's one of those books you can take to the beach or lounge by the pool with. Do you need to read Part 1? While it's not necessary, as the action in this book stands on its own, I would strongly encourage it. And will I be reading Part 3 when it comes out? You betcha. With the combined elements contained within Dead in the Woods, I'm dying to know what Brown is going to pull into Part 3.
Posted by Woofer at 7:08 PM