Move Over Twilight. . . There's a New Vamp in Town 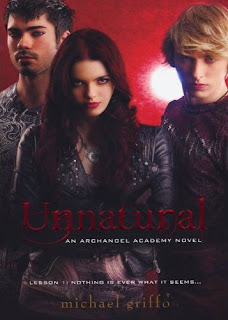 When I first stumbled across Michael Griffo's Unnatural I admit I kinda rolled my eyes (well, not kinda, I did roll my eyes). In a market already saturated with teenage vampires full of angst, did we really need another one? What made this one so different from the others? Well, the one thing I noticed was that the main character, Michael Howard, is gay. Other than that, based on what I read, it didn't sound much different from Twilight, The Vampire Diaries, and any other romance-driven teen vampire series. But having suffered through Twilight, I figured it couldn't be any worse.

Michael Howard is just like any other gay teenager living in a small town. That sense of isolation and of not belonging weigh heavily on him, and he longs for the time when he can pack his bags and leave. To compound his feelings of isolation, he lives with a drug- and alcohol-dependent mother and his maternal grandparents, who have made it obvious they want nothing to do with him. Running away from home is not an option because he has nowhere to go. He never really knew his father, who lives somewhere in England. When his mother commits suicide, it seems his prayers have been answered: the father he has never known comes from England to take him home. Michael is elated at the idea of going to live in London and getting to know his father.

Arriving in England, Michael feels like he has finally come home. However, the dream of getting to know his father is short-lived. He spends one night with his father before being sent to a boarding school, Archangel Academy. And that's where his life changes forever. That's where he meets Ronan. These two were fated to meet; unbeknownst to either boy at the time of their meeting, they have been dreaming of each other. But their relationship is in trouble from the start. Ronan has a dark secret that he longs to tell Michael, but he's afraid of how he will react. That dark secret is that he is a vampire, as is Ronan's ex, Nakano, who refuses to accept the fact that their relationship is over. At the time of Michael and Ronan's meeting, only one other person on campus (besides Nakano) who knows Ronan's secret is Ciaran, Ronan's brother.

While this might seem like the typical love triangle, there's more going on below the surface at Archangel Academy. As in the human world, prejudices exist within the vampire world. We learn that while Nakano and Ronan are both vampires, they are two different breeds of vampires. Nakano's breed is of the more traditional variety; Ronan is a Water Vamp, a crossbreed between a vampire and a water-dwelling humanoid. The Water Vamps can walk in the sunlight, but they need to feed on blood and return to the sea of their birth once in awhile; Nakano's kind need to feed on blood on a regular basis, and while they can walk about in the daylight, they can only do so on the grounds of Archangel Academy, which right away informs the reader that there is something about the school, but what exactly it is is not revealed—at least not in this book. The Water Vamps are considered inferior among the vampire world. The conflict for the novel is set: vampire against vampire, and a seething jealousy of an ex toward his replacement. But there is something else at work here, some other power that seeks to protect Michael and guide him toward Ronan. And while this mystical power attempts to keep the young lovers together, Nakano and his kind try to break them apart and claim Michael for their own. Who wins? You'll just have to read and find out.

I've always been of the mindset that you don't mess with vampires. They are an iconic part of the horror genre, and if you are going to make changes that go against what is traditionally known about the race, you need to explain it in an manner that will be acceptable to the reader. L.J. Smith's vampires were able to walk in daylight because of bespelled rings given to them by the witches. Griffo's vampires can walk in the daylight because one breed has inherited the traits on the non-vampire ancestor, and the other breed can as long as they remain on the grounds of the school, for whatever reason that may be. I'm assuming Griffo has this planned out and it will be revealed in Book 2 of the series. Even Rice's Lestat was susceptible to the sun's killing rays until he partook of the blood of the ancient Akasha, the Mother of All Vampires. Griffo also doesn't attempt to sanitize the vampire's means of sustenance. They are killers, but he does soften it some by explaining that Water Vamps don't need to feed as often, and when Ronan does feed, he chooses an elderly individual who is already close to death. Nakano, on the other hand, is more feral, defying the orders of his superiors and feeds on one of his fellow students, which threatens to exposed them all. There is a little tweaking followed by an explanation that makes Griffo's vampires palatable.

All if the trappings of the vampire romance are present, vampire meets boy, vampire loses boy, but does vampire get boy, or is boy seduced by the dark side? It's predictable, and if the book wasn't well written, you could lump it in with another series that shall remain nameless (HINT: see the title of this review) that I can't stand.

The main character in Unnatural is someone anybody teenager can relate to, gay or straight. In fact, we aren't told of Michael's sexual orientation until after we get to know him. We only know that he feels different, that he feels he doesn't belong. Anybody who has gone through the coming to terms with their own sexual orientation knows the signs, but for those who don't they are actually given the chance to get to know Michael as a person and to feel sorry for him and the situation he finds himself in at the books opening. In fact, with the exception of Nakano, all of the characters we are introduced to come off as "human", full of life and emotion, we see them at their best and their worst. Nakano doesn't seem to have any redeeming qualities; even when he is being tender with Ronan in an attempt to win him back, we know he is only doing so because he knows Michael can see them. Nakano is dark, as dark as they come, and Griffo seems to go out of his way to make certain we don't like him.

In addition to fully fleshing out his characters, Griffo also pays careful attention to detail, painting each scene with lavish descriptions so the reader can actually place themselves in the scene. When an writer pays that much attention to detail, there's always a chance to losing the reader, who just wants to get on with the story, but everything in Unnatural is well-balanced, and the novel doesn't slow it's pace at all. Griffo also has a talent for ending each chapter at a point that urges the reader onward.

My only problem with Unnatural (and 9 times out of 10, I always have a problem with a book) is the use of italics to indicate change in character. The chapter may start from Michael's point of view, but then there is some internalized thought from Ronan, which leads to a switch in POV that is sometimes confusing. There were times I actually had to go back and find out when exactly the POV changed and from whose POV I was reading from. It is possible that it's a formatting error as I did read the book on my Kindle. I want to get my hands on a print copy to see if the POV changes are a little more clear cut.

Starting Unnatural, I was going in with prejudice; I was so ready not to like it. In fact, I wanted not to like it, but I did like it, damn it. Archangel Academy is a series I will be following, and when I mentioned that I wanted to get my hands on a print copy, it isn't just to check the formatting; this is one series that will be taking a permanent place on my shelves, right next to Kelley Armstrong, Casey Daniels, Mark Del Franco, Kim Harrison, Anton Strout, and Carrie Vaughn.
Posted by Woofer at 8:02 PM