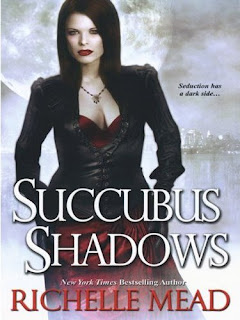 Georgina Kincaid is in Hell.

You would think this wouldn't be such a bad place to be for the eternally damned, but not even the Arch Demons would be so cruel as to torment one of their own with the situation Georgina has found herself in with Richelle Mead's fifth outing into Supernatural Seattle, Succubus Shadows.

For those not familiar with Georgina Kincaid, she is a succubus, a female demon who sucks the life essence from the men she sleeps with. The purer the soul, the stronger the essence. She can shape-shift into any form she so desires, including her wardrobe, so you would think life wouldn't be bad, but after centuries of such existence, Georgina has become unhappy. She longs for love, she wants to settle down with one guy, get married, raise a family, what every red-blooded American girl should want. But by her very nature, this is impossible. Her immortality and fear for the safety of Seth Mortensen, the object of her affections, is one of contributing factors that lead to their breakup. For the full back story, you will need to check out Mead's previous novels.

When Succubus Shadows opens, Georgina is throwing a combination house-warming/Halloween party for her new apartment. After winning a drinking match with a coworker and still reeling from the effects of the alcohol, Georgina reluctantly agrees to help Maddie Sato, her best mortal friend and coworker, plan her wedding to Seth. Helping your best friend plan a wedding to the ex you still love would be enough to drive a mortal woman to slit her wrists, but being immortal, suicide is not an option for Georgina. Instead, she spirals into a depression, an almost constant state for her since breaking up with Seth.

As if that wasn't enough, a mysterious force is preying on Georgina, using her darkened mood to try to seduce her. It calls to her with a siren-like song, promising her freedom from the pain she is feeling, and while Roman, senses the presence of this otherworldly power, he is unable to recognize the signature, which troubles him. He warns Georgina not to listen to the tempting voice, but eventually, worn down by her own dark thoughts, she succumbs to the seduction and disappears off the supernatural radar. Jerome, the Arch Demon of Seattle and Georgina's boss, can no longer sense her. It's like she no longer exists, which means her supernatural signature is being masked, or she is no longer in this realm of existence. They know she is still alive because if somebody has succeeded in killing her, she would have shown up in Hell. The search is own. Jerome MUST find Georgina before word of her disappearance reaches the inner circles of Hell. Jerome is in enough trouble with the demonic Powers That Be because he had allowed himself summoned and held captive be a dark sorcerer. If word gets out that he has lost one of his charges, well. . . there would be hell to pay.

Meanwhile, Georgina finds herself being held captive by the Oneroi, twin creatures of the Dream Realm who are seeking revenge for Georgina's part in the re-capture and imprisonment of their mother by the Angels. As their captive, Georgina is forced to dream. Some of the dreams are true, some are false, and some are a combination of both, but the endless stream of images leaves her questioning what is and isn't true. With each dream, the Oneroi feed, weakening Georgina to the point where she fears for her sanity.

Can she manage to reserve enough energy to escape the Dream Realm, or must she pin her flagging hopes on her friends and their ability to find her? Does this spell the end for our favorite shape-shifting demon from Hell?

First off, let me say that I love this series. Yeah, it's Chick Lit, but I look forward to each installment with all the anxiety of an expectant father. Each book in the series gets progressively better, and Succubus Shadows is, in my opinion, the best so far. Granted, not much happens in the way of action, but we are given further insight into Georgina's character through the dreams the Oneroi force her to experience and we learn more about her past.

In my previous review of Succubus Heat, I discussed my feelings about Seth and Georgina's relationship, as well as her relationship with Roman. Both men are present in Succubus Shadows, and despite having tried to kill Georgina in the past, we see Roman's feelings for Georgina growing, and while Georgina reflects on their past relationship and wonders if there could be a future for her and Roman, she is still unable to let go of Seth. The more Seth and Georgina try to keep away from each other, the more they find themselves in situations that only strengthen their ties to each other. The idea behind the series is formulaic in that I have a feeling we are seeing a Boy meets Girl, Boy Loses Girl, Boy gets Girl situation, but it is a story that has lasted centuries. Through Georgina's dreams we have learned that in her lifetime, she has developed emotional bonds to a few men who were of strong moral fiber, only to lose them. I find myself wondering if these men are all the same man. I'm not implying that Seth is by any mean a supernatural creature, but certain revelations within Succubus Shadows have me wondering if Seth, as well as the other men that Georgina has fallen for during her long life, are the reincarnation of Kyriakos, the husband she had betrayed while in her mortal existence, who is trying to reconnect with his soul mate. The fact that Carter, an Angel who likes to pal around with the Demons, seems particularly interested in Georgina's relationship with Seth, adds to the intrigue. Is it possible that if Georgina is able to reconnect with her long-lost soul mate she might be able to be redeemed and regain her soul, thereby regaining her mortal existence? This may seem a predictable story line if this is the direction Richelle Mead is choosing to take, but the ride we are on getting there is one never to be forgotten.

If you have not yet made Georgina's acquaintance, I strongly urge you to pick up Succubus Blues, the first in the series, and introduce yourself. Guaranteed, won't be disappointed.
Posted by Woofer at 11:36 PM