Burning My Passport, Never to Return 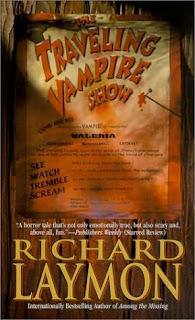 The Traveling Vampire Show marked my third trip into Laymon Country, a trip I swore I would never make after my second venture, The Cellar, but I was urged to pick this up by a friend because it was unlike any of his others. Reluctantly, I agreed to give it a try. Having finished it, I have decided to burn my passport and not return.

When the novel opens, we are introduced to Dwight, the sixteen-year-old narrator of the story (or maybe he's seventeen -- the fact that I can't remember is a clear indicator of how much of an impression this book made on me), and his pals, the slightly overweight Rusty and tom-boy Slim. It becomes evident early on that Dwight has the hots for Slim, but he isn't confident enough to do anything about it. Based on his thoughts early on in the story, you can imagine he spends quite a bit of his time masturbating or taking cold showers, but I'll come back to this.

Now, where was I? Oh yes, Dwight is mowing the lawn and his pals persuade him to take a break. Rusty has something he wants him to see. He produces a flier for The Traveling Vampire Show, which boasts to have a real-live vampire in captivity. The show is open for one night only, with an age restriction of 18+. Knowing they will never be allowed in, they decided to sneak over to Janks Field with the hopes of catching the showing setting up for that night's performance. None of them truly believe the vampire is real, but she is described as gorgeous and beguiling, so Rusty is hoping to get to see her. It takes some doing to persuade Dwight, but he finally gives in and they head off on their adventure.

The trio arrive at Janks Field before the Traveling Vampire Show arrives, so they plan on hiding in the surrounding woods until they show up. Their plans are foiled when they are attacked by a stray dog. They tack shelter a-top an abandoned snack stand, where they discuss how they are going to get away from the dog. Dwight comes up with a plan, and hopes nobody holds it against him if he kills the dog. He plans on jumping from the roof onto the animal, thereby crushing it and making the grounds safe for his friends. He missed, and while his friends create a diversion, drawing the animal's attention away from Dwight, the teen hightails it out of there with the promise of coming back with help.

By the time he returns in the company of his sister-in-law, they find the show has arrived and the troupe is on the process of setting up. There is, however, no sign of his friends. He fears the worst, thinking they fell victim to foul play at the hands of the workmen setting up the show. His sister-in-law manages to snag four tickets for the show after some innocent flirtation with the boss man. With nothing left to go on, they return home to find Rusty waiting for them. He confesses that he and Slim left just as they show was arriving, and Slim went on home to change her clothes. When they head on over to Slim's house, they find she is not at home, and they automatically jump to the conclusion that members of The Traveling Vampire Show have kidnapped her. When she finally turns up, she tells them of the atrocity she witnessed -- the Vampire troupe killed the stray, stabbed it to death with long spears before placing it in the back of a hearse. This kind of puts a damper on their desire to see the show -- well, Rusty still wants to see the beautiful, beguiling vampire. Dwight and Slim? They really don't want to go, but they decided to let Lee, Dwight's sister-in-law, have the deciding vote after they tell her everything.

When they get to Lee's house, they find she is missing. Her car is still in the driveway, her purse still on the counter. The jump to the conclusion that the Traveling Vampire troupe kidnapped her. After all, she paid for the tickets with a check, and the check had her address on it.

The rest of the book is more of the same, with the kids letting their overactive imaginations run away, leading them to jump to the wrong conclusions. By they time they get to the show, the book is more than three-quarters done. The action that takes place at the show is decent, but not realistic. Granted, men wish to show off for their friends and girlfriends, but when the first person is carried out in a bloody mess, that should be enough to make them think twice before getting into the cage with the vampire. It's not even enough to stop Rusty, who is thinking with his little head. The minute he saw the vampire strip down to nothing in the cage, he just knew he was going to volunteer. He's hoping for a cheap thrill, a few quick gropes, maybe more.

Which leads me to one of the problems I had with this book, and the problem I have with Richard Laymon in general. His books seem to be targeted for a horny teen male audience. A chapter doesn't go by that Dwight isn't thinking about sex; every time he sees Slim, he needs to describe the clothes she is wearing, with emphasis on the black bathing suit top under her white t-shirt, or the absence of a top beneath the t-shirt, which gets him hard. In one scene, he has actually suffered a premature ejaculation because he and Slim kissed. By the time the book is over, you kind of feel sorry for the kid because you know he's just got to have a major case of blue balls. Even when driving with is sister-in-law, he knows he shouldn't, but he keeps trying to catch peeks of her breasts through the gap in her blouse. These are actions I expect from curious 10 and 11 year old kids, not 16 year olds. A preoccupation with sex seems to take priority over realistic responses to certain situations. Add to this they way they are always jumping to the wrong conclusions, I get the feeling I'm dealing with young kids, not teenagers.

The second problem I had with the book is the absence of The Traveling Vampire Show. We don't get to the show until the final quarter of the book, and by that point I don't care any more. The actions leading up to the show are drawn out and unrealistic. I know horror fiction in itself is unrealistic, and the ability to suspend your disbelief is crucial. This is the third Laymon book I have read, and in each instance, I didn't just suspend my disbelief, I crumpled it up like a used tissue and flushed it down the toilet. Half way through the book, I stopped caring what happened to the characters. Their stupidity had me hoping they would all meet some gruesome ending.

The sad thing is, reading the jacket copy, the books actually sound like they might be good. When I picked up The Cellar, I thought it was an awesome idea. And it was. It was just poorly executed to the point where I was tempted to put it down. When the woman is captured by the creatures, I actually smiled, much the way I smiled when Rusty met his fate.

I know Laymon has a following and there are readers out there who praise him to high heaven. I'm not one of them. People who criticize Laymon are often said to be missing the point by those who hold him up on a pedestal. Maybe I am missing the point, but that isn't enough to tempt me to venture into another Laymon novel in search of that revelation. As I close the book on The Traveling Vampire Show, I am burning my passport, never to return to Laymon Country
Posted by Woofer at 10:43 PM