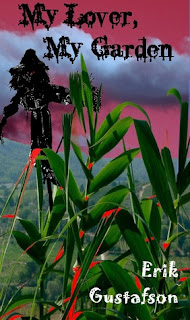 When choosing something to read, sometimes I look for something short. Nothing too involving, just something I can tackle in one sitting. I saw Erik Gustafson's My Garden, My Lover being promoted in one of the Facebook groups I belong to that is devoted to self-published authors. Since the dawn of the Agency Pricing Model, I have found myself reading more and more self-published authors simply because of the price. Sure, most of it is schlock, but there are some rare gems. And then there are those like Gustafson, who, to me, is a diamond in the rough. With a little polish, I can see him going far.

With that said, let me start by saying this was the first time reading anything by Gustafson, and I admit to being pleasantly surprised, while at the same time being disappointed with My Lover, My Garden. The premise was a bit over the top, which didn't bother me. It's somewhat simple -- an socially inept man finds a passion for life in the gardening skills he honed under the tutorial of an estranged uncle. When the uncle dies and leaves everything to his favorite nephew, the man's passion soon becomes an obsession, and rapidly moves on to his sole purpose for being. He gives up everything so he can devote every waking hour to the his one true love.

When the younger brother turns 18, he, like most children, seeks to escape the prison that is his parents' home, and with nowhere to go, he turns to his brother. He quickly finds out just how far gone his brother really is, and when he seeks to "rescue" the older man from his own life, the garden, like a jealous lover, rises up and seeks to destroy the threat. As far-fetched as this might seem, I found myself caught up in the story, which in and of itself would warrant 3 or more stars if I was assigning Star Ratings, so why only 2 stars? The book is an e-book, so I was basing how far I had to go based on my "percentage". Just past what I thought was the halfway point (about 60%), the story takes an incredulous turn, and I was left with an uneasy feeling that the author had grown tired of the story and and wanted to wrap it up as quickly as possible. But still I pushed on, figuring I still had another 40% to go for a satisfactory resolution, but then at around 63%, the story was done. The balance of "book" is devoted to promoting the author's new novel, which, by the way, I didn't read. I never read sample chapters that appear at the back of books, but that's just me.

Will I risk reading something else by this author? Yes, I'll take a chance because he was able to involve me in what I was reading. Would I recommend this particular work? Sure. It's short and can be finished in one sitting, but just be prepared for an unsatisfactory wrap up.