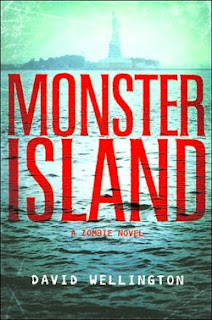 And so continues my zombie reads with David Wellington's Monster Island, Book 1 of his zombie trilogy. This was a Must Read for me since it takes place in New York City, and as a Native New Yorker, books that take place in and around the Big Apple go onto my list. Not necessarily because they are great reads, but more because I want to see how accurate they are to the locale.

The Zombie Apocalypse is already underway when Monster Island opens. Dekalb has already lost his wife to the plague, leaving him to protect his daughter in a world overrun by the dead. He is captured by a band of female warriors, most of whom are still in their teens and who under the command of Mama Halima, and he is separated from his daughter. While his daughter is being well taken care of, he is left to his own devices in a darkened prison cell, along with numerous others. While trying to negotiate better terms for the prisoners and expressing his desire to be reunited with his daughter, Dekalb learns that Mama Halima is sick and needs drugs. But not just any drugs. The female warlord is HIV+. Dekalb agrees to venture out under armed escort to retrieve the drugs she needs in return for his daughter. He soon finds out that all of the military medical bases have been looted, but he refuses to admit defeat. He says he knows where he can get the drugs, but he will need a ship and a crew. Once the ship, crew, and armed escort have been obtained, Dekalb sets sail for New York City.

Meanwhile, in New York, Gary, a med student, has all but given up hope. He thinks he is the only one left. He is of the mind, If you can't beat 'em, join 'em, and he has studied the zombie population at large and thinks he has discovered a way to improve upon their condition. They don't have to come back as shambling, decomposing, flesh-craving corpses. So, taking the equipment he thinks he will need, he sets a make-shift lab in his apartment and sets out to commit controlled suicide. When he awakens to his new life, he finds his experiment has been successful: he is dead, but he can still think and reason, and he can talk.

When the Dekalb and Gary cross paths, Gary convinces Dekalb that he can help with his mission, as he is able to move amongst the dead without fear of being attacked, since he is one of them. The only condition Dekalb has to agree to is that they take Gary with him when they leave. But can Gary be trusted? And is there something more going on than either one of them suspect?

While Monster Island starts off as your typical zombie apocalypse tale, it quickly evolves into something more. You won't find government experiments gone wrong here, nor will you find the dead rising as a result of radiation exposure or the product of some Haitian priest or priestess seeking revenge for a wrong done to his/her people. No, the reason for the dead rising delves deeper into the supernatural realm, which, when I saw where it was going, I wasn't sure I liked at first. Now that I have put some distance between the reading and the writing of this and allowed myself think on it, I feel this is the downfall of the novel. While the story did keep me interested to a point, my interest in it began to waver half way through when I saw where it was going. I know this is the first book of a trilogy, but I feel the whole supernatural element was too ambitious to be explained away in one book. In fact, I found the plot to be a little too contrived. The story starts in Africa, then jumps to New York City. You mean to tell me there was no place closer than the United States to search for the needed drugs?

My other issues with the book lay with the characters. I know they exist, but I had a hard time swallowing the whole teenage Amazonian militia thing. Since there are so many of them, the female characters strike me as being relatively flat, even those who have been assigned names. Dekalb as a hero doesn't work for me, as his character is too weak. While his main motivation is to be reunited with his daughter, he allows himself to be pushed around by the girls. Even when they are on foreign (at least to the girls) soil, he rarely takes charge of a situation, and when he finally does, it seems to out of character for him. Gary strikes me as the most interesting character, but even his character loses his uniqueness half way through.

I do have the other two books in the trilogy, and I will get to them eventually, but they are not high on my list of books to get to. The most diehard of zombie fans might want to add this to their Must Read list, but if you like your zombies of the more traditional variety, you might want to pass this one by.
Posted by Woofer at 7:19 PM