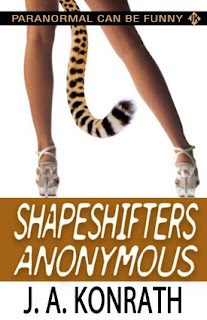 Until recently, I've only associated mysteries with the name Konrath. I have since learned that he also writes horror. I have a few in my TBR pile, which has grown exponentially within the past year (curse you, Kindle!), but when I saw Shapeshifters Anonymous, I just had to get it. It's not horror, more urban fantasy, and that was okay because I've been reading quite a bit in that genre as well. It's also comedic. I knew Konrath could be humorous—I've read Draculas, but since that was a collaborative effort, I wasn't sure exactly how much was him and how much was coming from the other authors. And because it dealt with shifters (and the fact that it was short), it jumped to the top of the pile.

Robert Weston Smith has a problem. He's a healthy individual: works out regularly at the gym, watches what he eats, and practices yoga and tai chi. So why, for the past three months or so, has he been finding strange items in his poop? That's what he hopes the doctor will tell him.

A physical examination produces a coat button, part of a zipper, and sixty-three cents in change, but no answers. The doctor suggests he visit a shrink, but Robert doesn't think that's going to provide any answers, but he promises to keep the appointment. When he returns home, he has a run-in with his annoying gypsy neighbor and her yappie little dog. Inside his apartment, he promptly passes out, not waking up until the next morning, which is when, upon going to the bathroom, he finds evidence that he has eaten his annoying neighbor. . . And her little dog, too. Realizing that the shrink isn't going to be of much good, he turns to the internet to find his answers. With growing horror, he was able to piece together a mystery, which only serves to make him more desperate to find answers. He continues to surf the web. After hitting one dead end after another, he stumbles across Shapeshifters Anonymous. What does he have to lose? He calls them and is told there is a meeting that afternoon. Before he can head out, he needs to swing by the doctor's office to pick up something they found in his stool sample—a sterling silver crucifix. On his way, he is accosted by a psychotic Santa, who delivers a rather cryptic message. He shrugs it off, thinking the guy nothing more than mentally imbalanced; he has more important things on his mind. The fun really begins when he arrives at the meeting.

You wouldn't think a guy on the verge of a nervous breakdown would be humorous, but in Konrath's skilled hands, it is. Almost from the very beginning, the chuckles start. You try not to laugh at Weston's plight (not with the strange items in your poop, but the whole embarrassment at having to take your stool sample to the doctor's office) because you can very easily picture yourself in the same situation, but you just can't help yourself. In that respect, Konrath's lead character becomes an Every Man. His characters are very realistic; as you meet them, you roll your eyes because you know people like this exist, and maybe you've even met some of them. From the pleasantly obnoxious nurse who seems to make it her life's mission to embarrass you in the crowded waiting room to the equally annoying kid full of questions to the parents who are reluctant to own up to the ill-mannered monster you just want to backhand.

As the story progresses at a swift pace, there's never a dull moment, even with the most mundane things, and the chuckles progress to outright laughter. If I was in doubt about Konrath's ability to do humor, this squelched any doubts I might have had.

My only issue, and you know there's always going to be one, is the romantic element that enters the story once Weston arrives at the SA meeting. Those who have read my reviews in the past know how I feel about romance in horror fiction. The same can be applied here. Too fast, too soon, improperly timed. I won't bore you with the details. Just let it be said that Weston's panting over Irena was not my favorite part of the story.

All in all, however, Shapeshifters Anonymous was an enjoyable read full of chuckles and laughs that really brightened my day. If you have the afternoon free, I would highly recommend it. You won't need more than a couple of hours, depending on how fast you read, as it isn't very long.
Posted by Woofer at 7:26 PM