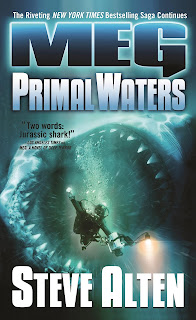 Last summer I started what I called my Don't Go Near the Water Summer Reading List, but unfortunately, when it comes to series books, I find I am unable to binge read any series. Eventually, I grow bored and put the book aside, quite possibly to never go back to it again. That's why, with Steve Alten's Meg series, I decided to space them out because I enjoy them so much that I don't want to get bored with the characters. So some six months after reading The Trench, I tackled Meg: Primal Waters, book 3 in the Meg series.

Unlike The Trench, which takes place a few years after the events in the first book, eighteen years have passed. Jonas Taylor is more or less a has-been, struggling financially and reluctant to admit that, although he loves his wife and kids, his marriage is in trouble. So when Jonas is offered the job as a consultant on a daredevil reality show, he jumps at the chance. Terry is against it, but reluctantly agree -- provided he takes their seventeen year old daughter with them. No way is she going to allow him to spend six to seven weeks away in the company of a bunch of wild young women. Neither of them realize Jonas, and by extension his daughter, is being set up so he won't return.

While Jonas is away, Angel returns, which inadvertently causes the death of Terry's father. And somewhere between Jonas's shooting location and the Tanaka Research Institute, another Meg has surfaced, which prompts Terry to confront her fears to do her part to save her family financially. Which leaves their fourteen year old son, together with Mac, to try to recapture Angel.

I've read books in the past that have tried to cash in on the reality show setting, and some authors have handled it successfully and others not so successfully, so I have to admit I went into this one with some reservations. Not that I had any doubt that Alten would create a thrill-ride worthy of Universal's theme park; I just wasn't sure the reality show setting was going to work for me. All my worries were for nothing. Three parallel story lines, each featuring their own megalodon (that's right, folks, you get not one, not two, but three megs in this one), race toward one explosive finale, and Alten skillfully weaves them seamlessly together. There's even a hint of something more dangerous than the meg living in the depths.

My only question is why the eighteen year span between The Trench and Primal Waters? It seems like a rather heavy-handed plot device to keep the story oriented around the Taylor family -- unless Alten knows something about the Meg reproductive cycle that wasn't made obvious in the narrative. You see, Angel is cycling through estrus, and the one male that Terry at first thinks is Angel, is in pursuit of the female. And Angel, having been raised in captivity, is returning home, like a salmon, in the hopes of spawning.

And there's something I must confess. Originally, I had no plans on reading past The Trench, which I had read when it was first published and recently reread to prepare myself for Primal Waters, but not too long ago, I read The Loch, and wanted to read Vostok, which is the sequel to The Loch, but it's also the prequel to Nightstalkers, so I figured I had some catching up to do. I'm not sorry. I had at first though Meg was going to be a tired rehash of Peter Benchley's Jaws, but I'm enjoying this a helluva a lot more than Jaws. Alten focuses on his prehistoric shark and the events surrounding its hunt and capture, and everything that happens serves to move the story thrillingly forward. There are no tangents to the stories, unlike Jaws, which gets bogged down in a Mafia storyline and a pointless affair, which often has the reader tempted to put the book aside. So if you're looking for a thrilling sea adventure, Alten's Meg series is the obvious choice. Next up, Hell's Aquarium, but I need to put some distance between Primal Waters and the next adventure. Stay tuned.
Posted by Woofer at 9:46 PM