THESE AIN'T YOUR NORMAL LITTLE BROTHERS 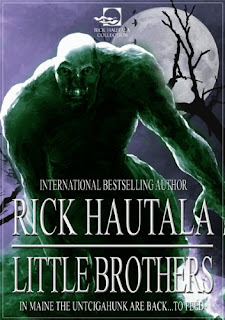 I first read Little Brothers when it was published in 1988. I loved it then, and during the course of moves, my dog-eared, well-read copy had become so used and abused it was falling apart to the point where I was afraid to read it again. So when I heard it was going to be released on Kindle (and other digital platforms), I was ecstatic.

Five years ago, Kip Howard witnessed the traumatizing events of his young life: the brutal murder of his mother at the hands of. . . What? He couldn't remember. As a result of the murder, his father, who was present at the time but did not witness the attack but did see the aftermath, abandoned work on the new house. But now that his father is about to once again start work on the new house, all of Kip's fears are resurfacing. As if that wasn't bad enough, the memories are trying to break through the wall he built up to keep them hidden.

The attack on Kip's mother was so brutal, it was initially attributed to some animal, but John Watson, the town's resident drunk, knows the truth. A Native American who was brought up in the area, Watson knows the legends that surround the land the town has been built on, and what killed Kip's mother is one of those legends. The Untcigahunk, the Little Brothers, a dwarf-like humanoid race that lives in the caverns and tunnels that run beneath the land. They surface every five years with a hunger for flesh and a thirst for blood. And their time is coming around again.

Man and boy will be brought together by chance, and together they vow to put an end to the Little Brothers once and for all. But do this unlikely duo stand a chance against a race that his been around since the dawn of creation, or will they be like so many others that have disappeared without a trace from the town of Thornton, Maine?

Little Brothers was Hautala's fourth novel, but it was my first exposure to this Master of Horror. The Untcigahunk are, in my opinion, one of the Horror genre's more memorable creatures, ranking right up there with that damned Zuni fetish doll from Trilogy of Terror. The readers seem to agree, as the Untcigahunk were to appear in several stories after Little Brothers was published.

This novel is not an edge-of-your-seat thriller, at least not at first. Hautala takes his time creating his characters, fleshing them out and making them real, giving you ample time to get to know and like (or dislike) them, so when something happens to them or they are placed in a position of danger, you do find yourself sweating it out right along with them, or cheering when the bad guy (yes, the Little Brothers aren't the only bad guys in the book) finally gets what he deserves. It isn't until the boy and Indian meet and start making their plans that the book (or Kindle in this case) becomes hard to put down. The details are rich, which makes it easier to lose yourself in the world of the characters.

If you haven't had the pleasure of reading the works of Rick Hautala, and many younger readers might not have because many, if not all, of his books are out of print, I can't encourage you enough to pick up one of them and give him a try, and Little Brothers would be an excellent book to start with. You won't be disappointed.
Posted by Woofer at 9:47 PM