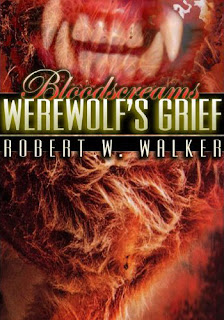 I first made the acquaintance of Abraham Stroud in Robert Walker's Vampire Dreams, Book 1 of the Bloodscreams series. Ex-military, ex-cop, archeologist, and hunter of the supernatural, Stroud has an uncanny knack of searching out the creatures of our worst nightmares, thanks to a steel plate in his head, an unpleasant souvenir of the war. His connection to the supernatural coincided with the return to his ancestral home, which just so happened to be in a town overrun by vampires. If you haven't read it, it's worth checking out.

Werewolf's Grief is no different. Stroud, in the middle of an archeological dig, is visited by dreams of a savage killer, and it isn't until the next day that he realizes what he has seen in his vision is more than a dream; he had established a direct link with the killer and was seeing the crime as it took place. Not able to sit back and let the police handle things, Stroud packs his bags and heads off to the scene of the crime.

He joins forces with Chief Anna Laughing More. Together, they investigate the brutal murders. Originally, they believe they are chasing a man named Kerac, someone with whom Anna has had a relationship. She is having a hard time believing that the man she once loved could be capable of committing such crimes. Further investigation only serves to raise more questions, as they find fur at the scene of the crimes. Upon analysis, they find out that the fur belongs to a wolf. Now they are working under the assumption that Kerac has a trained pet wolf -- that is, until Stroud has another vision that, as difficult as it is to believe, reveals that Kerac does not have a pet wolf. He IS the wolf. When Stroud presses Anna for details about her relationship with Kerac, she admits there was a change in his behavior recently, which leads Stroud to believe that Kerac is not the only one of his kind. Not content to hunt down Kerac and leave it that, Stroud takes it upon himself to hunt down and eradicate the entire pack. Will he survive? Or is this the end off Abraham Stroud.

Walker's werewolves were a refreshing change that harken back to the original werewolf of the movies. You won't find here the over-sized puppies we see populating so much of today's fiction, nor do they turn into real wolves. When Kerac turns, he becomes what I imagine when I think of werewolves, a ferocious half-man/half-wolf creature that is ruled by its corrupted animal nature.

When I first started this series, I was hoping for some out-and-out horror novels, and while they do have horror elements, I would classify them more as supernatural mysteries. They are to be fast paced and hard to put down. Stroud, as a character, comes off a bit gruff and stand-offish at first, and you aren't sure if you are going to like him, but once you realize what drives him, becomes an extremely likable character, one you want to root for and see come out on top. Walker's other characters, even his minor ones, the ones you know aren't going to see it through to the end of the book, are fully fleshed out individuals, and you do feel a loss when one of them dies.

If you haven't picked up this series, I would highly recommend it. Next up in the series is Zombie Eyes (although not necessarily the next book to be read in my TBR pile), and I can't wait to lose myself in it.
Posted by Woofer at 9:51 PM