Darkness in the Hearts of Men 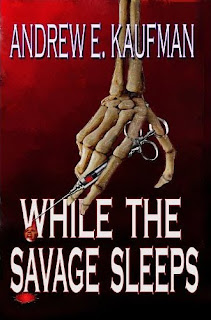 Every so often a book comes along that stirs up quite a buzz. You hear people talking about it just about everywhere you go. In many cases, it's a book by an established author who has a huge following and is being pushed by a major publisher as their latest cash cow. Other times the book is by an unknown backed by the money of a major publisher, their latest find, and sometimes it's by an independent author seeking to make a go of it on their own.

Once upon a time, independent authors were only known in small circles because the authors lacked the means and the funds to distribute and market their books. But since the birth of e-books and the self-publishing boom, thanks in part to Amazon's Kindle digital publishing platform, independent authors are beginning to make their mark. One such author is Andrew E. Kaufman, whose debut novel While the Savage Sleeps quickly rose to the Number One spot on Amazon's Kindle Best-Seller List. Among the Kindle forums, it was all that was being discussed. Granted, many self-published novels are lackluster and leave a lot to be desired, as they are either poorly written or in major need of a good editor. Kaufman's novel is not one of these.

Faith, New Mexico, is a sleepy, little town nestled in the valley of two mountains. It can be described as picture perfect, where mom and pop-type stores are in abundance and crime is virtually non-existent, which is why, when the body of Deputy Bradley Witherspoon is discovered, savagely mutilated and strung up like a side of beef, it sends shock waves through the community. And it's only the beginning.

While Sheriff Cameron Dawson races against time to stop the murderer before he/she can strike again, Doctor Kyle Bancroft, a prominent and "gifted" physician in Albuquerque, New Mexico, is being visited by mysterious visions of an old hospital and a little girl who delivers a dire warning: time is running out. As Kyle struggles to make sense of her visions, the body count in Faith continues to climb. Will Kyle be able to figure our the riddle of her visions in time to help Sheriff Dawson before the killer strikes again?

I'm normally not one to follow the herd, so to speak. I've never read a Grisham novel, as he tends to be consumed by the masses. A new one comes out, it's all you see on the train in the morning. I refuse to be one of those people. I read King, I read Koontz, but at the time I started reading them, I was young enough not to know who they were or just how popular they were with the masses. The fact that Kaufman's novel was being billed as a paranormal forensic thriller, I had my doubts. Forensic thrillers? Can't say I'm a fan. Paranormal? Okay, I admit it. Paranormal, supernatural, I'm so there. Numerous 5-star ratings on Amazon? Amazon ratings have burned me in the past, so it didn't really sway me. It's was the buzz online that finally swayed me. And let me tell you. . . I don't know what I was expecting, but what I wasn't expecting was a fast-paced, well-written mystery that I didn't want to put down.

Kaufman has a way of ending each chapter unfinished, prompting you to read on with an urgency, a need to know what happens next. There aren't many writers who can hook me in the first chapter and carry me all the way through to the end. In fact, the only author who has been able to do this to me in the past was early Dean Koontz, and even he seems to have lost something, as I have struggled with his more recent works.

Were there things about While the Savage Sleeps that I didn't like? Yes, but that can be said about every book I read. In recent years, only one book has blown me away so completely that there wasn't a bad thing I could say about it. While the Savage Sleeps comes close to that, and what I didn't like about it wasn't necessarily a bad thing; it just didn't work for me. There was a romance element that seemed out of place with the rest of the story. In my opinion, it didn't fit, but others I have heard from loved that aspect of it. It was the light in the darkness, as Kaufman's novel is dark.