WARNING: Being in Love With a Vampire Can Prove Hazardous to Your Health 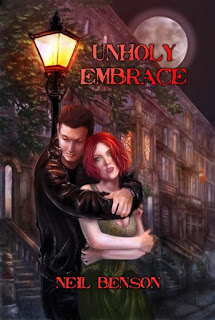 In a world overrun with books about mortals falling in love with vampires, I was hesitant to chance Neil Benson's Unholy Embrace. I wasn't sure if I was going to encounter a fiasco like the Stephanie Meyer's Twilight tragedy, but taking a deep breath, I braced the waters. I figured it couldn't be any worse. What I got was a pleasant surprise.

Benson's Unholy Embrace is the story of Frank Thornton. When we first meet Frank, he is already firmly ensconced in his relationship with Nessa Harcanu, a centuries old vampire. They are on their way home from a night at the theater when they are attacked by werewolves. Being what she is, Nessa successfully fights them off. It is Frank's first encounter with werewolves, and even though he knows Nessa is a vampire, it is also the first time he has witnessed her vampiric nature surface. It leaves him shaken.

During a cab ride to Nessa's apartment, we are treated to a flashback of how Frank and Nessa first met only three weeks earlier. Their attraction is immediate and, according to Nessa, completely natural. She admits that while she does have to ability to influence a mortal's thoughts, what she and Frank share is free of any vampiric manipulation. Once they arrive at the apartment, Frank wants to know why they were attacked by werewolves. Nessa believes they were sent by a demon she has been hunting. Vampires, werewolves, and demons, oh my! Any normal man would be running for the hills, but Frank's love for Nessa keeps him by her side. Are we sure there are no vampire charms at work here? The thought does cross Frank's mind, but decides he is in this for the long haul. He pressures Nessa to reveal her past. She tells him part of it, enough to make him think about what he is getting himself into. Needing time to think, he leaves, but eventually returns, telling Nessa that he won't cross over to her life, but he can't live without her, but he doesn't want there to be any secrets between them. If being with her is going to be dangerous, he needs to know what he is getting himself into. With a little nudging, Nessa reveals the details of her undead life. While the majority of her life comes across as being non-eventful, one person stands out -- Narice, the bride of her vampire sire. She is out for revenge, wanting Nessa to pay for destroying her "husband."

The balance of the novel is the hunter and the hunted, as Nessa and Frank hunt down the demon preying on New York City, they are in turn hunted by Narice. Do Nessa and Frank survive the encounter with the demon, only to be cut down by Narice? Do they successfully dispatch Narice, only to be destroyed by the demon? You'll have to pick up the book and find out.

Unholy Embrace is Neil Benson's first novel. I enjoyed the tale, but I found it to be a little overly ambitious, which I think is a shame because there is promise here. There is too much going on here for one book: Frank and Nessa's meeting and the building of their relationship, the hunt for the demon, and the pursuit by Narice. In an effort to get this all in, detail is sacrificed for the sake of story. I could very easily have seen this as a trilogy (or more) in the grand scale of Anne Rice's Vampire Chronicles, and therein lies the problem with the book.

For me, Frank and Nessa's relationship is rushed. After only three weeks, they are already confessing their undying love for each other. Nessa is very secretive about her past, and the fact that Frank is ready to jump in with both feet without know that much about her makes me seriously doubt Nessa's sincerity when she says there are no vampire wiles involved when it comes to their feelings for each other. I would have preferred to see the relationship progress at a natural pace, with Nessa revealing the details of her life over time. As it stands now, when Nessa tells the story of her life, she glosses over the details like she is recounting a bedtime story. There is a missed opportunity here to bring the character to three-dimensional life, fill in her past with lush detail as if she were actually reliving it. The lack of detail in her account has everything blending together as if it were a matter of days, not centuries. There is no change in the manner in which people speak, and the lack of period details feels like a blank canvas upon which the story unfolds. There is no color or texture. Her years in Budapest blend fluidly to her years in Vienna and Paris and, finally, New York, and there is no sense of time passing. There is enough material here to flesh out a book, but the author did not take advantage of the opportunity.

The hunt for the demon is a story of its own. If the author had chosen to flesh out the details, this could very easily have been a second volume. It could have been hinted at in the first volume, a foreshadowing of things to come. A third volume could have been the hunt for Narice. Narice could have been the thread that tied the books together, an ever-present threatening shadow hanging over our couple. After years of being pursued, Nessa's decision to take the battle to her nemesis and the search for the elusive vampire could fill yet another book.

Taking all this into account, is Unholy Embrace a bad book? Absolutely not. Is it worth reading? Yes. The fact that I am saying that the story could be expanded and fleshed out is a clear indicator that I want to see more. He puts his own spin on the supernatural world, and it's a pleasure to see vampires that have their fangs back, even if she doesn't want Frank to see that side of her, and his werewolves aren't over-sized house pets that want to curl up in your lap. I applaud Neil Benson's efforts in his first novel and hope to see more from him.
Posted by Woofer at 8:52 PM